Mario Party V² is a game in the Mario Party series which lets you play to up to 4-players, and is currently the fifteenth installment in the franchises.

Mario and friends are relaxing around the Beach until Bowser, Bowser Jr. and Kamek comes and warns them about the meteor, then everyone panics except for Bowser, Koopalings, Bowser Jr. and Kamek, then Bowser roars to stop everyone from panicing and tells everyone if we complete boards up in the galaxy, we can get to Fawful to defeat him, everyone agrees, and Hank C. Donovan is seen reporting a news that our heroes can save the world, Bowser asks who he is, Hank introduces himself and Micy, Hank also tells the gang that he works for Mushroom Kingdom TV, which is MKTV, then Bowser asks Hank to join the adventure, Hank agrees but is shy, so Rosalina is the only one who can send everyone to the galaxies.

At the next board, which is the Sunshine Isles, Pianta greatly enjoys it here, but then a worried Dorrie appears and warns everyone about Goomboss, who is brainwashed by Fawful too. The player has to win this board and prepares for the battle with Goomboss, then after Goomboss is defeated, he is no longer brainwashed and Bowser comes up to Goomboss and tells the story, then Goomboss sees Mario and his friends and is running to them to attack them, Bowser stops Goomboss and tells Goomboss what is gonna happen, then Goomboss joins the crew too and moves to the next board.

At the next board, which is the Shifting Desert, Daisy greatly reminds it from her kingdom Sarasaland, then a Dry Bones comes and warns everyone about Wingo, Toad says that he has defeated Wingo before, who is brainwashed by Fawful as well, the player has to win the board and prepare for the battle with Wingo, after defeating Wingo, Wingo is no longer brainwashed, then Wingo sees Toad and Toadette and grabs them with claws, Bowser demands Wingo to release them and explains Wingo about the meteor, then Wingo also joins the crew to the next board.

At the next board, which is the Frappe Mountains, Waluigi tells Wario that the crew doesn't get paid for freezing, then Mr. Blizzard gets up and warns them that Dry Bowser has been brainwashed by Fawful, and the player has to complete the board in order to defeat Dry Bowser, after defeating Dry Bowser, he stands up and moans about Bowser betraying Dry Bowser, Bowser calms him down and explains the whole story and Dry Bowser is part of the crew and goes to the next and final board.

At the next board, Bowser says that this must be it, and then Midbus appears and taunts them that they would never complete this board because this is impossible, Bowser tries to attack Midbus but Midbus teleports, the player has to complete the board in order to battle Fawful, and the player is preparing to battle Fawful.

After the player defeated Fawful, the castle collapses and all characters lands to the Beach, then Fawful tells everyone that they did a good job and completed a new mode (Director Mode), everyone celebrates.

Mario Party V² has a few features and modes to choose on the title screen of the game.

Pick a character and stop Fawful from destroying our world!

Pick a board and 4 characters and let the party start.

Play with other 4-players.

Play a minigame against three characters or one character.

Listen to all the music and voices in the game.

After completing the story you can make your own video with characters.

Put characters on a position and let them do poses to take a picture.

This list consists characters that are playable in Mario Party V², there have been many newcomers in the game.

This list consists boards in Mario Party V² which is chosen to play as or played in order in Story Mode.

This list consists Amiibo Boards in Mario Party V², you need a Amiibo in order to play a board.

This list consists minigames in Mario Party V² to play with, which you need to win. 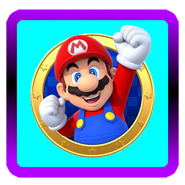 Application Icon
Add a photo to this gallery

Retrieved from "https://fantendo.fandom.com/wiki/Mario_Party_V%C2%B2?oldid=2442902"
Community content is available under CC-BY-SA unless otherwise noted.