Mario Party Switchup is the 12th game in the Mario Party series, following Super Mario Party. Released for the Switch, this installment of the classic party game seeks to introduce whole new ways to play the game, and to use the Joycons to their full extent. 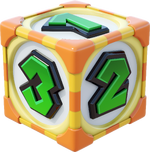 The basics of Mario Party are simple to get used to. Choose your character, Party Mode, and board, and take it from there. Of course, each Party Mode has its own unique quirks, but they all follow the same principles.

You'll be making your way around a massive, life-size game board, using a Dice Block to determine how far you travel. The spaces you land on each have a unique effect, such as giving or taking Coins. In most game modes, you can use Coins to buy items, which can be used at the beginning of a turn to help you out. You can also recruit Allies, special partners who can increase your roll, take some hits for you (Balloon Party only), or assist you in Ally Minigames.

All in all, Mario Party is a game about luck. So best of luck out there, you'll need it!

Classic Party goes back to basics, and it's your recommended starting point. The rules are pretty simple: roll the Dice Block to make your way around the board and collect Stars. Just make sure you've got enough Coins for them!

The winner is determined by whoever has the most Stars. However, there is always a chance of Bonus Stars, which allow anybody to make a comeback - unless, of course, you turn off Bonus Stars.

Connect to the Marioverse to play Classic Party with friends and strangers alike online! Similar to Splatoon, the game has a quick match system that groups players of similar skill with each other, allowing them to vote on the Board. However, feel free to make your own Room or join somebody else's!

Collect as many Coins as you can on your journey to defeat the big bad Boss guarding the treasure! Whoever has the most cash once the Boss is defeated is crowned the ultimate Superstar. The player who delivers the final hit on the Boss gets to take the spoils, meaning that anybody can win! On the other hand, you'll have to be strategic about how you use your items, since they all count toward your treasure total!

Connect to the Marioverse to play Treasure Party with friends and strangers alike online! Similar to Splatoon, the game has a quick match system that groups players of similar skill with each other, allowing them to vote on the Board. However, feel free to make your own Room or join somebody else's! In addition, check out the leaderboards to see if you stack up with other treasure hunters! 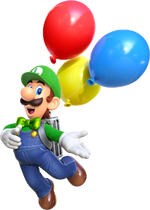 In Balloon Party, you're at the mercy of the winds. With nothing but a few balloons holding you in the skies, you'll need to burst the balloons hidden by the Cloudmaster. They can be anywhere on the map, behind any object. Once your turn ends, you'll have the opportunity to select items you're close to and try to figure out where those balloons are. But watch out, because it's Game Over if the Cloudmaster manages to pop all your balloons.

Alternatively, take on the role of the Cloudmaster! You'll have a massive Lakitu Cloud to ride in, and double the rolls. Protect your hiding spots at all costs, but try not to make it too obvious. If you pass another player, or land on the same spot as them, you'll zap them with lightning, popping one of their balloons! However, they could always call up an Ally to lend them a balloon...

Connect to the Marioverse to play Balloon Party with friends and strangers alike online! Similar to Splatoon, the game has a quick match system that groups players of similar skill with each other, allowing them to vote on the Board. However, feel free to make your own Room or join somebody else's! You can also check out the most popular hiding spots on maps, and adjust your playstyle accordingly.

In House Party, your goal is to buy and upgrade as much property as possible before the end of the game! Each property owned is worth 1 Star, but properties can be upgraded to be worth 3 Stars or even 5 Stars! You can buy a property away from another player by landing on it - and you'll pay less than what they had to pay to upgrade it to that point! This mode is all about being ten steps ahead of your enemies, and managing your Coins properly.

Connect to the Marioverse to play House Party with friends and strangers alike online! Similar to Splatoon, the game has a quick match system that groups players of similar skill with each other, allowing them to vote on the Board. However, feel free to make your own Room or join somebody else's! 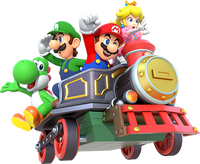 Two pairs drive karts, and race to the finish. Sounds familiar, right? That's sort of where the similarities stop. In order to keep your kart going, you'll need Mini Stars. You'll participate in a variety of minigames throughout the race, and each minigame will earn you Mini Stars to fuel your kart. The more Mini Stars you have, the faster you'll go and the longer your momentum will last! 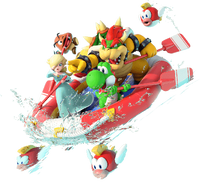 River Survival returns under a new name! Four characters board a small lifeboat, each character holding a single oar. Move the Joycons in a rowing motion to steer the boat, and avoid crashing. Collect clocks to increase the time limit, and burst Minigame Bubbles to rack up points that will go toward your time.

When you get to the end of a section - or the end of the river - remember to high five for a mega boost! 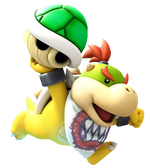 Arena Party is a battle of the wits, and minigame skills! Two teams of three must face off against each other, in a mode inspired by Fire Emblem and Mario Party: Star Rush. Each team has 3 Dice Blocks to use in a turn, and can use these rolls to move their characters. Maybe you want to move all 3, or perhaps one character three times? You'll need to move carefully, and use your Character Dice Blocks to your advantage.

Once you're in adjacent squares to an enemy, you'll participate in a 1V1 Duel minigame. The winner of this minigame will have the opportunity to inflict damage on their target. The better you do in the minigame, the more damage you'll deal! 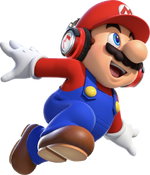 In Arcade Party, you get to freely play any minigames you've unlocked! Minigames are divided up into their respective categories for your ease of access, though you can easily set your minigame play to Shuffle for a more varied experience!

Also accessible from this screen are Sound Test - where you can listen to any of the tracks or voice clips you've encountered - and Marioverse. Marioverse allows you to make posts, postcards using assets from the game, or play minigames online!

The Wrecking Crew want you! In this very special mode, you get to construct your very own Board for Classic Party or Treasure Party! As you play the game more and more, and purchase items from the Crazy Cap store, you'll have even more items to work with.

Share your custom Boards with the world via Marioverse, and earn Medals. Alternatively, download Boards from other players across the world, or play with strangers on user-created Boards!

The Crazy Cap store is always open for business! With Crazy Cap Pop-Up Shops across the various Boards of the game, they're raking in some serious profit. Luckily, they also have a main store nearby, which sells essential goods, such as costumes, characters, and souvenirs.

Crazy Cap mainly deals in yellow Coins, though some items will require the rarer purple Coins. The clerk is randomly switched out each time you enter the shop, so you could be served by a Toad, a Tostarenan, a New Donker, or even a Goomba!

Retrieved from "https://fantendo.fandom.com/wiki/Mario_Party_Switchup?oldid=2758742"
Community content is available under CC-BY-SA unless otherwise noted.