The "Party hard" expansion for Mario Party Superstars is a set of DLC packs released from December 2021 to October 2022. It features new boards, minigames and a few other additions.

Spiny Desert: The pack added the board 'Spiny desert' from Mario Party 3, which means that now Mario Party 1, 2 and 3 each have two boards represented in the game.

All the changes can be found here

Reverse Mushroom: On both 'Woody Woods' and 'Spiny Desert', this new item returning from Mario Party 3 can be obtained. It can be bought from the shops and obtained on Item and Lucky Spaces. When using it, you roll a 1-10 dice and move the rolled number of spaces backwards.

Costumes: A feature from Mario Party 2 returns. In the game, the characters would wear outfits fitting the board. The costumes can be bought as a 'Costume set' at Toad's Shop for 200 coins. They can be disabled at the options house. The following are descriptions of the outfits for each board that's available at the release of this DLC pack:

Tag Team Match: The update added a way of playing Party Mode that was available in Mario Party 4-8: the Tag Team Match, here the four players are devided into two teams of two, which share Coins, Stars and Items. 1-v-3 minigames aren't available, and only two players from oposing teams can Duel. Team Members cannot be affected by each other's item effects.

Pirate Dream: Also added was Pirate dream from Mario Party 5. All the changes can be found here (there'll be a link here someday) 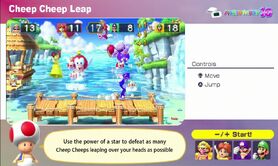 Minigames: Pack 2 is the first DLC pack to add minigames. This pack added 20 of them from Mario Party 4-10, bringing the total to 120. Nintendo announced that more will be added in the future to "give fans the possibility to revisit even more minigames they know and love from past games of the beloved series all in one game"

Below is a full list of minigames in this pack

{Tanklear Arsenal is the microphone minigame Verbal Assault, but it was changed up to work without a microphone, so the old name doesn't make sense}

Minigames: This pack added another 20 minigames from Mario Party 4-10, bringing the game's total to 140.

minigames: This pack added ten minigames from Mario Party DS. These minigames had to be adapted to the Switch's missing touchscreen and microphone support and its' single screen.