Mario Kart IC is a racing game for the Nintendo IC, created by Arend's brother, famous from WarioWare: Showing Off. In Mario Kart, the player needs to be the fastest on the race course. Race tracks often have gimmicks. To help or hinder the player, this game includes items the player and opponents can use. This game includes more game modes and secrets than any other Mario Kart game. Let’s-a go!

On the title screen, the player can one of the three options:

If the player waits a while on the title screen, a little gameplay demo will show up.

1 to 12 players
In Grand Prix mode, the player needs to race all four courses from the selected cup against 11 other players/computers. After each race the player gets points, depending on which place the player ended. The player (or computer) who got the most points in the end wins the Grand Prix.

In Single Player mode, when the player got first place on a cup, he/she will also unlock karts, bikes, new characters, new game modes or even new items. The player won't unlock prices when played in Multiplayer mode.

1 player
Play as your Mii in this game mode. In this mode, the player tries to become the champion in Mario Kart. To do that, the player needs to win races. If the player won a race in first place, he/she will get a Star Coin. With more Star Coins, the player can go to different places and take kart upgrates. There are different areas with each four races, a misson and a boss race. The boss race and the misson can only be accessed after winning all the races of a area. Here is a list of area's and what they include.

This is the first area the player visits. Unlike other areas, this area doesn't have race courses exlusive to Story mode and also doesn't have a boss stage.

This is the second area the player visits. The player can travel to it if he/she has 3 star coins.

This is the third area the player visits. The player can travel to it if he/she has 8 star coins.

This is the third area the player visits. The player can travel to it if he/she has 12 star coins.

This is the third area the player visits. The player can travel to it if he/she defeated all bosses.

1 or 2 players
Take on missions, alone or with a friend. There are 10 different sets with 8 missions. If all missions of a set are completed, the player must defeat a Boss on a special battle court. Winning from a Boss will reward the player with a nice present.

1 to 12 players, Nintendo Wi-Fi support
Race with custom setting. Race on a single track or make own Grand Prix. Race alone or in teams. Just play how you like to play. Nothing can be unlocked in this game mode.

Pop balloons of other player. There are actually two different types of this mode: Survival and Time. In Survival the last person standing wins. Loosing all balloons will result in loosing the match. In Time the person who popped the most balloons in the time limit wins. When the player looses all three balloons, he/she will loose a point. The amount off balloons the player will start with (3, 5 or 7 balloons) can be set before playing. Also the time for Time mode can be set.

(Locked, unlocked after beating 50cc Lightning Cup)
Only the Bob-omb is an item in this mode. Throw Bob-ombs at other players. When the player hits somebody, he/she will get a point. If the player got hit by somebody else, he/she looses a point. The first person who got a certain amount of points or the most points within the time limit wins.

(Locked, unlocked after beating 50cc Feather Cup)
The player must get a Shine Sprite dropped on the course and keep in hand until time runs out; on the other hand, players who couldn't take the Shine can use the items against whom got the Shine to lose it. If you or somebody else drops the Shine Sprite, try to pick it up.

(Locked, unlocked after beating 100cc Feather Cup)
Everyone has 5, 7 or 10 Grand Stars when the game starts. To let someone drop a Grand Star, hit him/her with an item. If you or somebody else drops a Grand Star, try to pick it up. The first person who got a certain amount of Grand Stars or the most Grand Stars within the time limit wins.

1 player, unlocked after beating all cups on the Backward 150cc Class in Grand Prix
Select a course to play on. The player got a time limit in this mode. Try to drive under the gates to get more time. The goal of the game is to drive trough as many gates as the player can before the time runs out. On the way, the player finds item boxes with mushrooms or triple mushrooms in them. Nothing can be unlocked in this game mode.

In Grand Prix, not only does the Engine class determine how fast a vehicle is, but it also determines how good the computer racers are. In Grand Prix, there are 5 classes.

In Versus mode, the options are a little different compared to Grand Prix. An engine class only determines how fast a vehicle is, but not how good the computer players are. Also, Mirror and Backward options can be switched on or of in any engine classes.

Will be played in teams or all individual

How tracks will appear

Which vehicles will get used

The appearance of strong and weak items

Which tracks will be played

How many races will get raced

No weight or height classes in this game. Every character can drive in every kart the player has unlocked. Each playable character adds extra speed, weight, acceleration and handling to the kart. How big the bonus is on a category depends on the character. This game has 28 playable characters from the Mario series. This amount is four characters more than in Mario Kart Wii. Also, three Mii costumes are selectable after unlocked. Originally Mario Kart IC had 32 playable characters, but after the big list was criticized, the creator of the game deleted some. This game also has an option to select a random character, a function not present in most Mario Kart games except Mario Kart: Super Circuit.

The player can choose between karts and bikes in Mario Kart IC. Karts have more speed, get better and longer mini-turbos after a power-slide and have external drifts. Bikes can perform wheelies, have internal drifts and get a better and longer mini-turbo when performing tricks. Every vehicle can be driven by every character, but a character will add more speed, weight, acceleration and handling to a kart. Only the Standard Kart and Standard Bike are available from the start, but other karts and bikes can be unlocked by almost every Grand Prix cup. Karts and Bikes can also be unlocked in Time Trial and Mission Mode. This game does not only have new karts and bikes, but also classic vehicles can be unlocked.

These tracks are new in the game. The cups with Original Tracks are:

These are classic tracks from older Mario Kart games. The cups with Classic Tracks are:

These are both new and classic tracks. These courses are played in story mode and after a winning from a boss, these courses can also be played in Grand Prix, VS or Challenge modes. The cups with Story Tracks are:

Of course, every track has its own music. All the classic tracks will have the same music as the original versions of them. The music of classic tracks mostly sound exactly the same as the original, however in some cases quality will be improved. New tracks will have new music on the background. Sadly, the creator of the game does not have software on his computer to create good soundtracks with. And even if he did, the music was probably bad. This means that we can’t show new or original music.

But no need to worry, he does have one soundtrack most people never have heard before. The music is never used in any video game. The soundtrack is found in the beta version of Mario Kart DS. The creator of Mario Kart IC, thought this beta music was pretty good and thought it would work in this project.

This music will be played on courses with the word Circuit in it, but each will have a different variation of the soudtrack.

When more information is confirmed, more images will appear.

Fake Item Box
Add a photo to this gallery 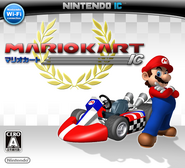 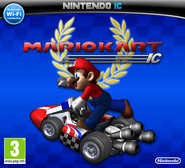 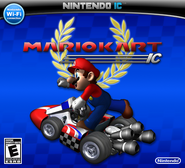 North American Cover
Add a photo to this gallery

Who is your favorite? Everything is unlocked

Introduction for SNES Rainbow Road
Add a photo to this gallery
Retrieved from "https://fantendo.fandom.com/wiki/Mario_Kart_IC?oldid=2041167"
Community content is available under CC-BY-SA unless otherwise noted.