Mario Kart Aquamarine is a game for the Wii Aquamarine. It features the same gimmicks as past games, such as gliding, underwater and anti gravity. Its big feature is the minipads, which make you tiny when driven over. It is planned to be released in holiday 2018. It is being worked on by Nintendo, Namco Games, and Legendary Incorporated.

The gameplay is quite similar to the other games of its franchise, with Anti Gravity, Gliding and Underwater racing being the same. The main new feature is the minipad, which makes you tiny and everything around you huge. After the minipad section is over, it goes back to normal. Another feature is being able to change the time setting before in a vs race, changing the lighting ect., but mainly is just for aethstetics. This doesn't work on the new Rainbow Road (But does work on the GBA version since it isn't set in space but in the night sky above peach's castle). Some tracks already have a different time setting thats not day, like GBA Rainbow Road (Night) and Tropical Boardwalk (Night) but it still can be customized.

Like other games, you can race through any course alone and test your speed!

Race on any track you want! You can customize the player count, how often certain items will appear, turn off coins and items, change the ccs (You can change the ccs to any number you want, there is no limits, as well as converting to mirror!) and more!

btw in all of the battle modes, double dash is supported as well as multiplayer

Balloon Battle is extremely different. Instead of having 3 balloons and having a all-out war, you have a team, red or blue. Each team has a large balloon on opposite sides of the arena. The goal is to hit the other team's balloon 3 times with items. Whenever you hit a balloon, you loose your items if you have triples, and you are carried back to your spawn point to prevent spamming. Whichever team pops the other team's balloon wins.

You have a customizable- 2 minute by default and 6 max- time limit to collect as many coins as you can. It can be a free-for-all game or a team game. In team game, the coins are shared between teams. If you are hit by a item or fall off a cliff, you'll lose some of your coins and the coins will fall on the ground to be picked up by other people. If someone uses a mushroom and bonks into you, they'll steal some of your coins. Whoever has the most coins wins. Unlike Mario Kart 7, there is no limit on how many coins you can have at a time. Coins respawn in random places over time. Golden Flower does not appear in this mode.

Like Double Dash, you are on the battle area and the only items are bombs, triple bombs and rarely black shells. Whenever you explode someone, you gain a point and the other person loses it. After someone reaches 5 points (20 in team mode) that person/team wins. Teams are activated where points are shared and teams cannot hit the same team with bombs.

The same aspects as balloon battle from N64. Its the exact same thing with better graphics and the things from this game.

Alternate Characters can be bought in the shop (Same place as where you can buy dlc packs), where, after you click the character, it shows up with the alternate costumes list for that character. You buy each costume seperately, so you cant buy all of the mario costumes for 1 price. You buy them with coins, and not real money. DLC Packs sometimes come with extra alternate costumes.

The Nitro All Cup Tour with all nitro courses. Luigi Circuit is always first, and Rainbow Road is always last, but otherwise completely random.

(MK64 tracks can be reused 'cause they are all used up)

The Full All-Cup Tour is all the tracks, retro and nitro, all in one cup. Luigi Circuit is always first, and Rainbow Road is always last, but otherwise order is completely random.

these 10 seconds, which you can launch two of them at a time. Imagine Triple Green Shells :O)

Lots of merchandise was released for Mario Kart Aquamarine. Slot cars were released which take advantage of the slots anti-gravity feature as well as a glider ramp thing.

Like Mario Kart Wii and 7, motorized karts and tracks were released for the game. 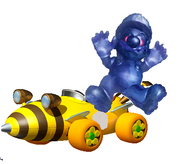 Shadow Mario with the Bumble V 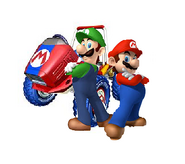 mansion resembling the one of King Boo's Spooky Speedway.

CREDITS TO THE SONG/REMIX OWNERS FOR THESE SONGS, I HAVE NO RIGHTS TO THEM

Retrieved from "https://fantendo.fandom.com/wiki/Mario_Kart_Aquamarine?oldid=2040914"
Community content is available under CC-BY-SA unless otherwise noted.