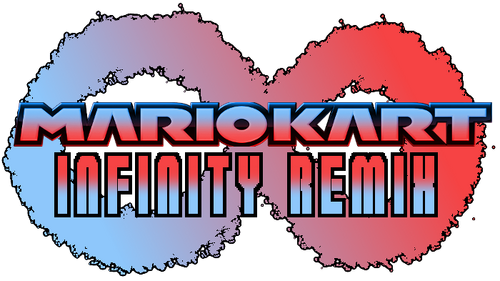 Unlike previous installments, Infinity Remix doesn't introduce elements that affect the layout of courses, although gliding, underwater, and anti-gravity sections do return. Instead, the game focuses on introducing new modes that flip the Mario Kart formula on its head, labeled as Remix Modes, making for new and engaging experiences for veterans of the series. Additionally, Battle Mode returns from Mario Kart 8 Deluxe, as does Mission Mode from Mario Kart DS.

The gameplay maintains the traditional elements of previous Mario Kart games, specifically from Mario Kart Wii and Mario Kart 8 Deluxe. Players pick characters and vehicles of varying stats, strengths, and weaknesses, and race against each other in obstacle course-like race tracks to finish first of 15 racers. During the race, players can pick up Item Boxes to either help themselves or hinder other racers.

Infinity Remix brings back several elements from previous games. Notably, the gliding, underwater, and anti-gravity sections introduced in Mario Kart 7 and Mario Kart 8 return, functioning identically to their previous appearances. Coins can be collected along the track to increase one's overall top speed, and like Super Mario Kart and Mario Kart: Super Circuit, there is no cap to the total of Coins that can be collected. Kart customization, introduced in Mario Kart 7, also returns, with players being able to customize bodies, tires, and gliders to make their own vehicle. Kart, Bike, Sport Bike, and ATV bodies return from Mario Kart 8, and a new body type is introduced; Team bodies that allow players to use two characters in a similar manner to Mario Kart: Double Dash!!. Lastly, auto-accelerate and smart-steering return from Mario Kart 8 Deluxe, and a new feature can also be toggled on and off; a reticle that helps with aiming items like Green Shells and Bob-ombs.

Point distribution is handled similarly to Mario Kart 8 and Mario Kart 8 Deluxe, in that every racer will get at least a point when they finish a race.

While Infinity Remix doesn't introduce any mechanics that change how the game functions, several new modes have been introduced that turn the standard Mario Kart formula on its head, called Remix Modes. Most of these modes can be toggled on and off, and are to provide fun and new experiences for players.

Grand Prix in Infinity Remix works similar to previous installments, particularly Mario Kart 8. Players can select from 50cc, 100cc, 150cc, and 200cc engine classes, all of which are available by default. Players choose a cup, which takes them through four consecutive races in a set order. The points players earned for each race are tallied up, and depending on their placement, they can receive a trophy at the end.

Time Trials lets the player complete a course with the fastest time possible. They are provided with Triple Mushrooms at the start of every attempt, allowing them to take shortcuts and save time. Players can also race ghosts, weather it be Staff Ghosts or ghosts created by players around the world. Times can be set and ghosts can be created on either the 150cc or 200cc engine classes; there are Staff Ghosts on every course for both.

A new feature to Time Trials allows players to race against up to five different ghosts at once.

VS mode can be played locally with up to four players. Compared to previous games, Infinity Remix allows the most customization of any game thus far. Similar to the Super Smash Bros. series, individual items can be turned on and off. Players can additionally race individually or in teams, choose what courses appear, play them randomly, or play them in order, and set how many CPU characters there are.

Battle Mode can be played locally with up to four players. It is most similar to its iteration in Mario Kart 8 Deluxe, and like that game, several different modes are available. The player in the lead will wear a crown on their head, and almost every mode can be played in a free-for-all or a team setting. As with VS mode, individual items can be turned on and off. Unlike other modes, the maximum amount of players in Battle Mode is 12 like in previous games in order to keep the teams even.

Although karts can be customized, the character selected has base stats that the vehicle parts' stats act off of. There are six categories that characters can perform in:

As in Mario Kart 7 and Mario Kart 8, players can customize their own vehicle using different bodies, tires, and gliders. Some parts can change colors for all characters or a specific group of characters.

Each part will either add or subtract stats from a character's base stats. The lowest a stat can go is 0.1; should a character and kart combination bring a stat below that number, it will still remain at 0.1.

While in previous games, vehicle parts were unlocked randomly by collecting Coins, parts can now be bought at Toadsworth's shop. Only some of the vehicles are available for purchase at the start of the game, though more will become available the more the game is played. In particular, the Gold Standard Kart, Gold Tires, and Gold Glider will always be the last parts to be available in stock; every other part is randomized in terms of availability. Only the Standard Kart, Standard Bike, Standard ATV, Standard Double, Standard Tires, and Super Glider are available frm the start.

There are five types of bodies; Kart, Bike and Sport Bike (outside and inside drift respectively), ATV, and Double.

Every item, with the exception of the Crazy 8, from Mario Kart 8 Deluxe returns, along with several more items that were either featured in previous games, including the Mario Kart Arcade GP installments, and new items altogether. Items can be earned by driving through Item Boxes like in previous games, granting them a random item depending on their placement in the race. Weaker items such as Bananas and Green Shells are given to players in the higher positions, while powerful items such as Stars, Spiny Shells, and Bullet Bills are given to players in the lower positions.

The game has 80 courses total, split among 20 cups, with four courses in each. The Mushroom, Flower, Turnip, Egg, Feather, Cherry, Acorn, Shine, Star, and Special Cups consist of brand-new courses while the Shell, Banana, Leaf, Coin, Bell, Boomerang, Horn, Heart, Lightning, and Moon Cups consist of returning courses from previous games, all remastered to fit the additions of gliding, underwater, and anti-gravity sections.

Retrieved from "https://fantendo.fandom.com/wiki/Mario_Kart:_Infinity_Remix?oldid=3311141"
Community content is available under CC-BY-SA unless otherwise noted.