A remaster for the Nymbus called Mario Kart: Platinum was released worldwide on May 3rd 2020. The remaster features all of the content from Mario Kart: Gold as well as 16 added tracks, 10 characters and various new gameplay features.

The new Plasma Gauge mechanic relies on a point-based system where players can earn points during a race to try to fill their Plasma Gauge. When the capacity of the gauge reaches 100, players earn an 8-second speed boost before their gauge resets to 0. The plasma in the gauge can be affected by a wide range of different actions, which are listed below.

A new feature is Waluigi's Slot Machine. If the player wins a race, they will receive a Purple Slot Token which they can use in the Slot Machine. Here, they have a chance to receive a Playable Character, Vehicle Parts, Stamps or Coins. The slot machine which is seen by the player is based on Waluigi's design, however it is a Purple Toad which operates the device.

In order to use Waluigi's Slot Machine, the player must first acquire a Wa Token. The player starts the game with one Wa Token but they can be obtained either through completing tasks, or by purchasing them with real money. Wa Tokens can be achieved by:

Once a Wa Token is obtained, players must put the token into the machine to receive their prize.

Wa Token Jackpot
$9.99
Add a photo to this gallery

Mario Kart: Gold includes 168 collectible stamps that can be obtained from the Slot Machine, and beating other players' time trial times. When another player's time is beaten, the user can select a stamp from their Stamp Book to copy into their own Stamp Book. All stamps can be won from Waluigi's Slot Machine but some stamps have alternative methods of unlocking.

Stamps 1 through 100 are in the base game and further stamps were released in future updates, with more released in the DLC package.

Player now have even more customisation options when it comes to vehicles. Instead of being stuck with one color, players can choose whatever color they would like their kart to be. For example, the Pipe Frame kart would normally be the same color as the racer (eg: Mario's would be red), but now players can change this, adding thousands of possibilities to vehicle design.

Propellers are now the fourth vehicle part which can be customised. Each one affects underwater racing, affecting stats such as speed, off-road and traction while underwater.

Every game mode in Mario Kart: Gold has a host character which becomes playable after requirements are met within that game mode. They are all costumes for Toad.

Grand Prix is one of the main game modes available from the start of the game. At first, players have access to only the Mushroom, Flower, Shell and Banana Cups, but by completing all four of these, they can unlock the Star, Special, Leaf and Lightning Cups. There are five modes in Grand Prix with increasing difficulty.

Additionally, All-Cup Tour makes its return for the first time since Mario Kart: Double Dash!!. Up to 4 Players race on all 32 tracks in the game in a randomised order, but always starting with Rosalina Circuit and ending with Wii Rainbow Road. Grand Prix is hosted by Blue Toad.

Up to 4 Players can play together on the same console. VS Races are essentially free-play. All sorts of settings are customisable by the user, including number of CPU opponents, item frequency, Engine Class, Vehicle Restrictions, item restrictions. Items can even be turned off to make for competitive races. Team Races are also possible, with up to 4 teams of three; Blue, Red, Yellow and Green teams. VS Race is hosted by Green Toad. Results points awarded are somewhat more strict than in recent iterations of the franchise, as positions 9th - 12th will recieve no points at all.

A new mode that shows up alongside Grand Prix and VS Race, Elimination Circuit is an event which lasts about 20 minutes. 12 racers begin the race, but at the end of every lap (or track segment), the last racer to cross the finish line is eliminated from the event. As the number of racers decreases, the game becomes more chaotic, with enemies filling the track and portions of the course crumbling away. Elimination Circuit is hosted by Yellow Toad.

Time Trials returns to the Mario Kart franchise. This time around, multiplayer time trials are available, allowing two players to record their own time trials simultaneously. Staff Ghost Data returns as well - this time, there is only one staff ghost per track, however the difficulty is quite high and the ghosts require a lot of practice to beat, particularly on the harder tracks. All Time Trials are recorded at 150cc.

Battles are similar to those in Mario Kart 8 Deluxe, with the option of playing in teams (default) or individually (in certain modes, there is no option for individual play). This time, there are 12 Battle Courses to select from, and the introduction of several new battle modes.

Online mode returns, with up to four players being able to play online from the same console. Players can enter 'Regional' or 'Global' leagues. Regional leagues are exclusive to the user's country, while in Global leagues, players from all over the world can play together. The user also has the option to set up rooms to play with their friends, either exclusively with friends, or against strangers with friends. Online is hosted by Black Toad.

Missions return to the Mario Kart series for the first time since Mario Kart DS, as a single-player mode where players can earn Vehicles and collectable stamps. There are 8 levels, each with 8 missions and a boss fight for a grand total of 72 missions. Missions mode is hosted by Light Blue Toad.

Mario Kart: Gold features a wide range of playable characters, 20 of which are available at the start of the game. The rest have to be unlocked from completing challenges. The costumes feature returns from Mario Kart 8, with many returning costumes including Tanooki Mario.

Metal Mario
Heavy
Add a photo to this gallery

Mii
Varied
Add a photo to this gallery

Cookatiel
Heavy
(New Driver!)
Add a photo to this gallery

Within weight classes, there are further sub-classes of character that have different stats. There are six stats in Mario Kart: Gold which all appeared in Mario Kart 8, which are Speed, Acceleration, Weight, Handling, Traction and Mini-Turbo.

In addition to a weight class, each character has a size, which determines the size of the vehicle that they drive. These sizes do not necessarily correlate with weight.

Characters can be unlocked in two ways - either by completing a specific amount of races, or by another method. Once the criteria has been met, the player must beat the character in a 1 v 1 race at a random track at 150cc.

In Mario Kart: Gold, half of the game's default tracks are ones which have previously appeared in a Mario Kart game and are returning to the franchise. 'Retro tracks', as they are called, make up 4 of the game's 8 cups. Many of these tracks have been updated with new features and aesthetic changes to make them feel both fresh and nostalgic at the same time. In the downloadable expansion, 7 out of 16 of the added tracks are retro tracks, scattered throughout the four new cups added in the expansion.

There are a total of 12 Battle Courses in Mario Kart: Gold. 8 of these are available from the beginning and 4 must be unlocked.

(* Stages marked with an asterisk must be unlocked before you can play there.)

Mario Kart: Gold features a selection of both new and returning Mario Kart items. Several items, such as the Thunder Cloud, make their first appearance outside of their debut. 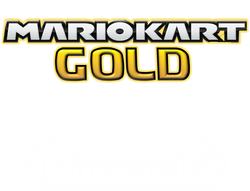 Amiibo are functional with Mario Kart: Gold. The player can unlock alternate costumes for some characters by scanning their amiibo. See the Alternate Costumes section for information about the costumes that these amiibo unlock. Furthermore, the player can scan any other amiibo once a day to collect 25 coins. All amiibo, when scanned, have a 1% chance of giving the user a Wa Token.

On 14th August 2018, a free Demo Version was made available on the Nintendo eShop. In this version, the player is able to play a Grand Prix of the Mushroom Cup or Shell Cup. The only playable characters are Mario and Luigi, and the only kart available is the Pipe Frame.

The template which is used for character icons. (free to use)
Add a photo to this gallery

Retrieved from "https://fantendo.fandom.com/wiki/Mario_Kart:_Gold?oldid=3191994"
Community content is available under CC-BY-SA unless otherwise noted.