The most prominent new addition within the game is the Track Builder which allows you to build your own courses. Bikes, ATVs, hang-gliders, underwater mechanics and anti-gravity are also confirmed to return.

The gameplay maintains the traditional elements of previous Mario Kart games, mostly from the three recent installments on the Wii, 3DS and Wii U respectively. Karts, which feature similar designs from Mario Kart 7, can be customized once again, alongside the returning bikes, which handle similar to the karts now and can only perform a wheelie via a boost, and the ATVs from Mario Kart 8 also return. The hang-glider, underwater mechanics and anti-gravity also return, as well as Coins, with the player being able to collect up to ten in one race as in Mario Kart 8. Like Mario Kart Wii, twelve racers are present in normal races. Tricks and the ability to look behind also return in this game. The most prominent return is Double Dash mode in which you can race with two drivers in one kart. Some item boxes on the track will turn into double item boxes. However there are no special items this time around,  but there is chemestry which either can increase or decrease your stats while driving.

The newest feature introduced in the game is the Track Builder. You can build your own course with the blocks you have. You can construct your own course with the available pieces. You unlock new parts through Time Trails, Missions and by completing Grand Prix. You can save your courses and play on them with your friends. However playing on customized courses online isn't possible. Mario Kart TV also returns from Mario Kart 8 with all its features. A new addition is that, although DLC, you can play retro courses that already have been remade in previous games. Battle Stages also return again, after their absence in Mario Kart 8.

The game also features Wii U GamePad integration. In addition to the standard Off-TV Play, players also have the option of displaying the course map, and when neither the Off-TV display nor the map are being displayed, the GamePad can be used as a horn button. Players have the option to toggle between these features at will. The GamePad can also be used to toggle on and off the gyroscopic steering.

Additionally, if the player falls off the edge of the track, Lakitu will pick them up and drop them back on to the track. This makes glitches involving falling into areas impossible.

Point management works similar to Mario Kart Wii and 8, except that every racer gets at least one point in Grand Prix mode. Below is a chart of the point spread comparison between these nine games: 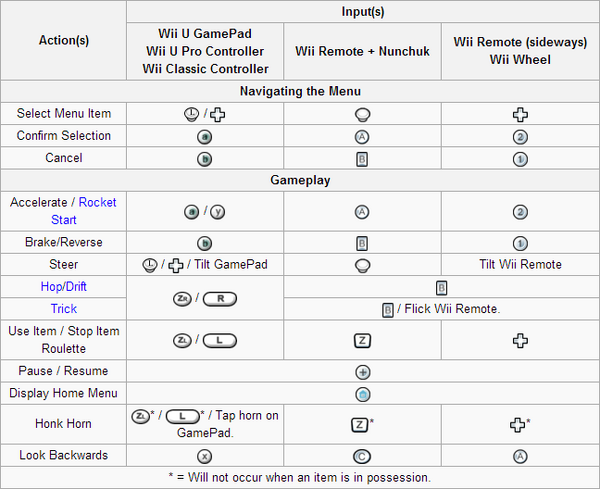 There are various game modes for Mario Kart NX. All modes available on singleplayer (some also on local and online multiplayer) are listed here.

Mario Kart NX's Grand Prix works similar to past installments. Only the Mushroom, Flower, Shell and Banana cups are available at the start of the game, the others which can be unlocked by completing them. Two new cups have been added for both the Nitro and Retro cups being Cherry and Boomerang cup respectively. There is the usual four-race marathon. However, players now have the option to do a multiplayer Grand Prix.

Time Trial mode lets the player complete a selected course in the fastest time possible. Like in Mario Kart 8, the user can upload ghosts onto Miiverse and other players can give their comments about it. Additionally the user gains a stamp once he or she has competed a race against a Nintendo Staff member ghost. Leaderboards also return.

VS mode can be played locally with up to 4 players. Players can set rules like which items appear, the difficulty level of the CPUs, and Team or Solo racing. Players can also set how the courses appear, choose a course after one is finished, or play all tracks randomly or in order.

Battle Mode again featured specially build stages, which were absent in Mario Kart 8. However unlike other installments Mario Kart NX doesn't feature any Retro stages but instead has more new battle stages. Balloon Battle can be played in teams or in free-for-all mode. It combines survival battle mode from Mario Kart DS and earlier installments and the timed points battle mode introduced in Mario Kart Wii; all players start with 3 points and 3 balloons each. Successfully making an opponent lose a balloon awards the player a point, and losing a balloon through any method will cause the player to lose a point. Balloons can never be regained (unless one is stolen from another player with a Mushroom), and if all balloons are lost, points can no longer be lost or gained. Defeated players can still drive and attack players as a Ghost however, so a player with a high score and no balloons can still win. Players can also now adjust the time limit from one to five minutes.

Mirror mode returns in this game, as an unlockable mode. It is unlocked by getting a gold trophy on all cups on 150cc. It also can be used as a set rule for online tournaments.

Double mode makes it return from Mario Kart: Double Dash as an unlockable mode. It is unlocked by getting a trophy on all mirror mode cups. It also can be used as a set rule for online tournaments.

Just like in some previous Mario Kart games, players can race matches online against each other. This time players can race with random people both Worldwide and Continental, they can play in a Friend lobby, and they can start and participate in Tournaments. Players can set their own rules for tournaments.

The new mode in the game is Track Builder in which you can build your own tracks. You have a standard set of building parts and more can be unlocked upon completing Time Trails, Grand Prix and Missions. You can save your courses and play on them along with your friends in VS mode.

Mario Kart NX brings back many characters that were cut from previous games like Petey Piranha, and Birdo. The game introduces 16 new characters to the series: Nabbit, Plessie, Lubba, Boom Boom, Flutter, Spike, Tiny Kong, Pauline, Fawful, Kamek and Chargin' Chuck. There is a total of 43 characters with 20 of them being unlockable. There are 7 different weight classes: Feather, Welter, Light, Medium, Cruiser, Bulky & Heavy. 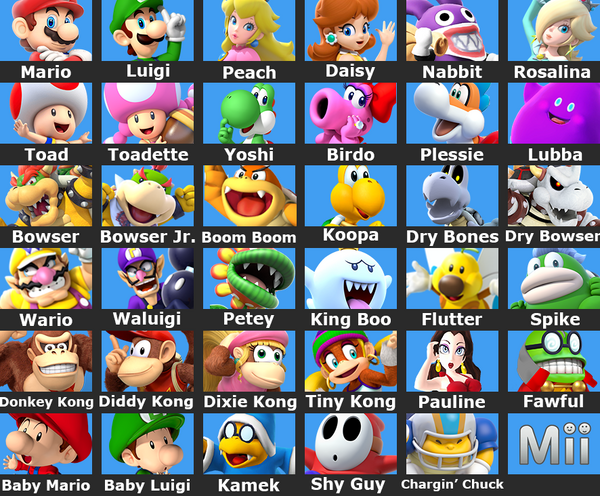 This time around the Retro Courses take on a whole new personality. Each cup now has 8 courses, making it the biggest selection of retro courses yet.

As in all Mario Kart games, Mario Kart 9th keeps the use of items during the races. Three new items have been added to the list, being the Freezie and the Fire Bar. The Poison Mushroom makes also a return as an item since its first appearance in Super Mario Kart.

Like in Mario Kart 8, players are restricted to carry only the item they're currently holding or dragging. Releasing the item in use will allow the player to take another from the boxes. The balance of items for the gameplay remains the same. And like in Mario Kart: Double Dash!! the players hold the items in their hands.

As in Super Mario 3D World, NES Remix and Mario Kart 8, players can obtain stamps to use in Miiverse posts. There are 90 stamps in the game: 28 are available from the start, while the rest can be obtained by winning a Grand Prix with certain characters or defeating staff members ghost in Time Trial in all the stages.

Retrieved from "https://fantendo.fandom.com/wiki/Mario_Kart:_Drift?oldid=2939047"
Community content is available under CC-BY-SA unless otherwise noted.