Mario Galaxy: Walubba's Wrath is the third installment in the Mario Galaxy series as well as the first of the Walubba Trilogy. It was released on November 2, 2012 for the Wii. The gameplay is unique in that the player can play as Mario and Lubba in both 2D and 3D platforming levels as well as Wario and Waluigi in optional minigames. Two sequels are planned, but no details have been disclosed.

The game begins when Wario and Waluigi are reading a book at the Delfino Library. Suddenly, they came upon a page about Moneyruption Galaxy, a fabled area deep in space with golden volcanoes which spew thousands of coins. Envisioning themselves with vast riches, they instantly grabbed the book and dashed out of the library as the librarian, a Pianta, yelled at them. They crafted a rocket out of spare parts in WarioWare, and with the help of Kamek blast off into space. Shortly afterward, however, they crash into the Spaceship Mario.

Frustrated, Wario and Waluigi sneak into the Control Room of the Spaceship Mario and steer its course to Moneyruption Galaxy. They manage to trick, corral, and lock up all the Lumas on board. However, Lubba slips away unnoticed and hops in the escape pod, setting course for the Mushroom Kingdom to warn Mario. But Lubba becomes exposed to radiation from Gamma Pajama galaxy and blacks out. He awakens in the Mushroom Kingdom and rushes to warn Mario of the Spaceship Mario's peril. With E. Gadd's assistance, Mario and Lubba build a rocket and begin pursuing Wario and Waluigi through the cosmos.

After reaching Gamma Pajama Galaxy, the pair encounter a mysterious cosmic entity who introduces himself as Walubba shortly before attempting to fry them with his lasers. Mario and Lubba flee and barely escape with their lives. From far off, Wario and Waluigi, who have converted the Spaceship Mario into the Spaceship Wario, observe the incident and decide to hire Walubba, who they believe can keep Mario at bay as well as keep the unruly Lumas in line, who have begun to make quite the racket. In return, they promise Walubba a share of the loot they acquire in Moneyruption Galaxy. Walubba, even greedier than Wario himself, accepts. Meanwhile, Mario and Lubba continue to pursue them through various galaxies.

Eventually, Wario, Waluigi, and Walubba arrive at Moneyruption Galaxy. What they find there, however, is a barren wasteland. Confused, Wario pulls out the book and reads that the volcanoes on Moneyruption Galaxy have been extinct for centuries. Waluigi smacks Wario on the head. Walubba, enraged that he wouldn't be paid for his efforts, locks up Wario and Waluigi with the Lumas, easily overpowering them. Furthermore, Walubba plots to completely destroy Moneyruption Galaxy by blowing it up with Bob-Ombs. Elsewhere, Mario and Lubba continue to get closer and closer to the Spaceship Mario.

Waluigi is able to escape through an air vent in the ceiling. After a tiring search, Waluigi acquires the key and frees Wario. In their hurry, the pair accidentally forget about the Lumas and leave them imprisoned. Wario and Waluigi then begin searching Moneyruption Galaxy for any signs of coins, desperate for some loot to feed their greed. They discover a large quantity of coins and begin collecting them. But they are unaware that Walubba is readying his supply of Bob-Ombs to destroy the galaxy. Mario and Lubba arrive at Moneyruption Galaxy and confront Walubba.

Walubba informs them of his plan to blow up Moneyruption Galaxy. He also reveals that he will enslave Lumas on board the Spaceship Mario and create an army which will rival even the Koopa Troop. Afterwards, he releases the Bob-Ombs and flies toward the Spaceship Mario, initiating a series of explosions. However, Mario and Lubba beat Walubba to the Spaceship Wario and blast off into space, rescuing all the Lumas just before the galaxy completely explodes. The Spaceship Wario becomes the Spaceship Mario once again. They fly all the way back to the Mushroom Kingdom to celebrate, but when they arrive they find the Mushroom Kingdom in great turmoil. Toad squeals to Mario, explaining that Princess Peach has been kidnapped during their absence.

In the end, Wario, Waluigi, and Walubba are seen floating somewhere in space. Wario is attempting to collect wayward coins which drift by but is unsuccessful. The trio have reconciled and begin to discuss ways to destroy Mario. Suddenly, a huge shadow looms overhead. They turn around and behold Bowser's Airship. Bowser and all the bosses Mario has faced step out and toss Princess Peach, tied up, in front of them. Bowser suggests they all come together and form an unstoppable force that will overwhelm Mario and all of his allies. To be continued... 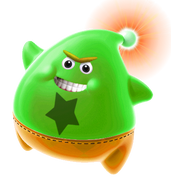 Walubba
Add a photo to this gallery
Retrieved from "https://fantendo.fandom.com/wiki/Mario_Galaxy:_Walubba%27s_Wrath?oldid=2115971"
Community content is available under CC-BY-SA unless otherwise noted.