The Mario Forever series is developed by Metal Locked for Flame Games - with the series published by Flame..

In the series, characters from other worlds can gain access to Mario's world and vice versa.

Therefore this can create many problems for the heroes of the series.

NES Mario and Super Metalix search for the Master Emerald 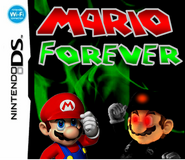