Mario Chase is an arcade game developed by Hammer Egg House, Inc. and the first game in the Lava Path series. It takes place during the events of Super Mario World and is from a Blargg's perspective. The gameplay is to chase Mario across a lava lake and eat him, clearing the level. It was only released in the USA.

The gameplay is simple: you control a Blargg chasing Mario. Though you can go faster than Mario, Mario can jump on ledges. Mario can also use Yoshi when he finds a Yoshi Egg. When he does, he can flutter jump, or throw eggs to slow you down. Yoshi only lasts for 10 seconds. Both players can also use items. Coins also appear. If you fall into a pit or Mario makes it to a gate, you get game over, but you proceed if you catch him.

All items can be used by either Mario or the Blargg. Each one is temporary.

Though the game was only officially released on an arcade cabinet, the game could also be played via hack on Super Mario All-Stars + Super Mario World. The game used the data from many of the games on the actual game, including the SMB2 and SMW character sprites, SMB3 tiles, SMB pipes and more. The only differences in this version was the graphics, Mario had a score as well, which would be recorded onto the high score leaderboards with yours, and the fact that Mario would exit the area via pipe. 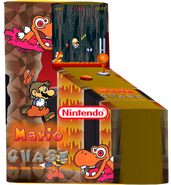 A prototype of the arcade cabinet.

Retrieved from "https://fantendo.fandom.com/wiki/Mario_Chase_(game)?oldid=2046989"
Community content is available under CC-BY-SA unless otherwise noted.