Start a Wiki
Mario 3D World 2: The Dream World is the sequel to Mario 3D World, and, to a lesser extent, Super Mario Bros. 2. It takes place in Subcon, like SMB2. It will be released about two months after it's prequel.

Gameplay is similar to Mario 3D World. However, this game removes Yoshi, and adds digging from the ground. It also introduces a health meter: instead of going Form - Normal - Small - Dead, you now have three hearts, and you can gain more. You turn small once there is only one heart left. Also, you can now double-jump in midair, and some characters have special abilities.

After returning from the Freezeen Kingdom, Mario, Luigi, Peach, Toad, Wario, Yoshi, Daisy, Gina, and Prince Perry discover the entire kingdom has been put to sleep. Heading to the castle, they discover that it has been taken over by Wart- an old enemy of Mario's. Mario, Luigi, Peach, Toad, and Wario grab veggies and charge at the large frog, but are stopped by his minions. Fryguy roasts Toad, sending him flying. Clawgrip grabs Peach and throws her. Tryclyde shoves Luigi into a magic jar, teleporting him away, and Mouser uses a bomb to blast Mario into the distance. Yoshi, Daisy, Gina and Perry flee to find the heroes.

Mario, Luigi, Peach, Toad, and Wario wake up in Subcon, which has been taken over once again- like the Mushroom Kingdom. They realize they need to save the Subcon Fairies once again, and set off on their new adventure.

The frog Wart is back! Team up as Mario, Luigi, Peach, Toad, and Wario and stop the reign over the dream world Subcon!

You can choose your character before every level.

After Wart is defeated, the destroyed Dream Machine is teleported into the kingdom. A bunch of Toads use a crane to carry the giant machine to a junkyard. However, after they leave, a couple of clouds reveal themselves as the Koopalings in an Airship. Iggy and Lemmy climb down and fix the Dream Machine. With a smirk, the Koopalings use their wands to teleport the eight heroes back to Subcon, and kidnap the Subcon Fairies. Thinking Wart is back, the heroes arm themselves with veggies.

After defeating Boom-Boom the first time, the heroes are confused. Why is Boom-Boom working for Wart? In the distance, they see the Koopalings' airship dropping Larry and Wendy into the nearby castle. Realizing that they only defeated Bowser, they set off to defeat the Koopalings.

There are three different ways to play multiplayer:

With this mode, two people sit next to each other and hold half of the 3DS. One person uses the Control Pad instead of the buttons and the Control Disc to walk/duck, and L to do anything else. The other person uses A, B, X, and Y, and plays as Fishin' Lakitu. Fishin' Lakitu can move left and right (in midair, on his cloud) with Y and A. He can drop Sky-Blue Spinies (which walk in front of the other player, killing any enemies they touch, and bouncing on walls) with B. He can also create Boost Blocks (like in NSMBU) with X. After hitting X, he uses A, B, X, and Y to move it up, down, left, and right (respectively) and the start button to place it.

With this mode, you use 3DS Download Play to connect with three other 3DS users (who don't need the game card). Each of you pick one of the eight characters and work together to beat the game. 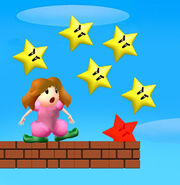 Daisy and some Blockheads. 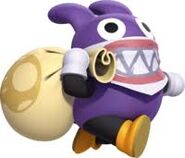 All four of the previous artworks pieced together. 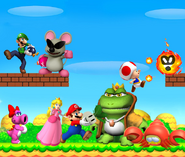 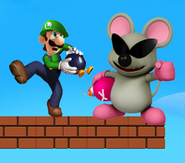 Mario and Peach battling Wart, with Clawgrip and Birdo watching.
Add a photo to this gallery
Some other artwork seen in Mario 3D World.
Retrieved from "https://fantendo.fandom.com/wiki/Mario_3D_World_2:_The_Dream_World?oldid=3219546"
Community content is available under CC-BY-SA unless otherwise noted.