Mario is a playable character in Super Smash Bros. Calamity. Mario is a long-running and most famous mascot of Nintendo, appearing in multiple games and spin-offs made by Nintendo outside of the Mario universe. Mario is the Mushroom Kingdom's savior, saving it and Princess Peach from the clutches of Bowser and otherworldly forces of evil with the help of some allies and power-ups that he gets throughout his journeys.

New up tilt, a hop kick, which is stronger, but cannot be used as a juggling tool.

Side smash does more knockback.

Side smash has an alternate animation when uncharged which is weaker.

New neutral aerial, which his is former down aerial, Mario Tornado. It does multiple hits and deals more damage.

Mario has a new down air which is stronger and can meteor smash (and bury opponents on the ground), with his former down air being his neutral air.

Firebrand from Mario & Luigi: Superstar Saga is combined with his neutral special, Fireball, which is stronger than original neutral special at full charge.

"Mario is an all-rounded character and very easy to pick up for new players of the game. Mario is fairly strong, medium-weighted and overall, a balanced character. Mario can easily kill with his smash attacks, forward aerial and back throw. He can ledge trump with his aerials, his fireballs and his cape, which can make opponents turn around, trumping recovery options."

Mario can crawl and wall jump.

Mario can cancel his side taunt via rolling, so his cap will be taken off until he does his side taunt again, in which he will simply put it back on. Also, if Mario performs his side special with his cap in hand, Mario will throw it forward similar to how he throws Cappy in Super Mario Odyssey. The cap stays in place for at least five seconds before disappearing, so Mario and other characters can jump on it. 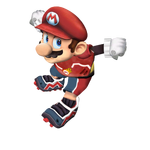 Retrieved from "https://fantendo.fandom.com/wiki/Mario_(Calamity)?oldid=2566311"
Community content is available under CC-BY-SA unless otherwise noted.