Mario & Nintendo All-Stars Racing is a racing game for the Nintendo Switch. Despite having "Mario" in the title, it is not a Mario Kart game. It also features a few non-Nintendo characters.

As one would imagine, Mario & Nintendo All-Stars Racing is a racing game. The overall gameplay is similar to the Mario Kart series, specifically Mario Kart 8 (Deluxe), as it keeps the anti-gravity mechanic. Characters have differing stats. However, they are restricted to one kart with corresponding colors, which resembles the Standard Kart from Mario Kart 8 (Deluxe). The game also has an Adventure Mode, like Crash Team Racing and Diddy Kong Racing.

Wizpig is back for revenge, and this time, he plans to take over all Nintendo universes. Taj manages to get all of the playable characters (the non-unlockable ones that is) at Timber's Island, and this is where the game begins.

Characters are divided into five different wight classes, being (from lightest to heaviest) feather, light, medium, cruiser, and heavy. There are 12 characters in each class, making there 60 characters in total, with 30 being available from the start, and 30 being unlockable. 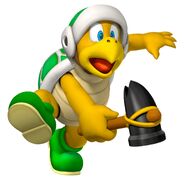 Add a photo to this gallery
Unlockable

Retrieved from "https://fantendo.fandom.com/wiki/Mario_%26_Nintendo_All-Stars_Racing_(UUnlockedMario)?oldid=3216737"
Community content is available under CC-BY-SA unless otherwise noted.