Mario & Luigi LIVE is a MMORPG made by Bomb Productions Games & Sprak Co. (Previously Twenty-Second Choice) for the Nintendo DS. Since it is a Bomb Production, please do not edit except for spelling errors.

The story starts out as you, the player, is greeted by Starlow, who welcomes you to the Mushroom World. She then summons the Star Spirits to put your Star Energy, what you are now, into a new being. You are then asked of your name, which you type in, and then you are taken to the Character Creation/Customation stage. After you "deck out" your character, Eldstar will order Starlow to take you to your new body. You and Starlow (You are now a transparent version of your character) skydive down to the Mushroom Kingdom and you suddenly become mortal. (Not transparent.) Being a helpless baby, Toadsworth comes to your rescue and takes you to Princess Peach's castle. Upon arriving at the castle, Toadsworth strikes a conversation with Peach, saying that he "found another one". Peach then explains that many orphan babies have been showing up around the Mushroom Kingdom lately and no one knows why. So, Toadsworth takes you to a playroom and locks the door behind him. So, you decide to play with some of the toys in the room. You are playing until Bowser in his Koopa Klown Kopter and two Goombas break into the playroom. Bowser is looking for Peach, but he accidentally broke into the wrong room. As he is leaving, you shout "Meanie!!" and Bowser gets offended and decides to fight you. This is mainly a tutrorial fight in which Starlow, exhausted from doing this same routine with so many people, teaches you to jump, attack, etc. After defeating Bowser and his Goombas, Bowser is amazed that he was beaten by a baby and decides to go look for Mario. Starlow then congratulates you and gives you an item. (Usually a Mushroom, but sometimes a Lucky Clover or 1-Up Mushroom.) When Starlow completely flies away, you travel outside to Toad Town. When outside, the real online experience begins. Other players are here walking around, but you can't battle them yet. There are also many shops, but with no money, you also can't buy anything. If you go to the pause menu, it will show you what each icon means and what it does. Most paths to get out of Toad Town are blocked, (Well, for you) so you go down a path. The path leads to a strange hut. And who should be in the hut but Starlow. Starlow greets you and asks you to go with her into the hut. Inside the hut are many star sprites like Starlow, but all with different colors. She asks you to pick out a star sprite for yourself, making the appropriate star sprite your "Guardian Sprite". You are then taken to a menu that shows each star sprite's personality and appearance. You choose one and Starlow gives you that one to name yourself. After naming it, Starlow will send you out with your Guardian Sprite and the exits to Toad Town, plus the shops and options of battling monsters and other players, are now open. You can now battle other players, befriend other players, and battle other monsters, as well as explore Dry Dry Desert and the Bean Bean Kingdom. Shops are also open, so you can shop for new accessories/clothing, items, and more. If you choose to go to Dry Dry Desert, you will be immediately confronted by three Pokeys. Defeat them and you will be able to battle/befriend/partner up with everyone in the Dry Dry Desert area. Like Toad Town, Dry Dry Desert has many shops and shacks. If you choose to go in front of the Dry Dry Ruins, your Guardian Star will either tell you to go in the ruins or stay out until you're a certain level. (There's about a 50% chance for each.) If your Star Guardian tells you to go in, you will be able to battle/befriend/partner up with every person in the ruins. If you go into the main tomb, (which is in an opening) you will be confronted by the area boss, Tutankoopa.

The first step (after entering a name) in creating a character is to choose a species, a gender and an age. This affects appearance, available items, available jobs and statistics. Listed below are the basic species, gender, color, and age combinations available. "Types" for some classes are also available. (For example, for the Tanooki class, there is a Normal type or an Isle Delfino Type. The Isle Delfino Type refers to the type of Tanookis found on Isle Delfino, which are usually bigger and more genetically different than Normal Tanookis.)

Starter Items are certain items you start out with at the beginning of the game. They are a Mushroom, Maple Syrup, and Lucky Clover.

Being an MMORPG, Mario & Luigi LIVE uses Nintendo WFC constantly through the game. It's capabilities for the game include battling/befriending/partnering up with your friends/people online. Battling people online/your friends gives you the option of having multiple battles with your friends and others wirelessly. You can level up this way. You can also befriend people, meaning that you can acquire their friend codes and invite them to battle or journey with you. By partnering up with someone, (up to 4 people on a team) you can travel with your friends and battle others/monsters on a team of your own. If you want to control members of your team by yourself, you may, by creating team members using your own imagination.

Many patches are available over Nintendo WFC. Patches add more content to the game to make your experience in The Mushroom Kingdom even more fun! The default patches are listed below. Other patches need to be bought using in-game currency or Nintendo Points and then added. The default patches are free, and you can add them if you wish. New patches, under the "Available Patches" section, can be bought by the number of points/coins (the same amount of points and coins) listed below them.

Using this patch, areas from the classic game Mario & Luigi: Superstar Saga will be added to the game!

Using this patch, areas from the game Mario & Luigi: Partners in Time will be added to the game!

Using this patch, the Beanish class is available!

Using this patch, the Ukiki class is available!

Using this patch, the Poison Mushroom item is available! Turn your enemies tiny!

As said above, these patches are only available to buy, using either Nintendo Points or Coins in the game. They include...

Using this patch, areas from the game Mario & Luigi: Bowser's Inside Story will be added to the game!

Using this patch, you can recruit the three toads, Toad, Blue Toad, and Yellow Toad. However, these will replace your current party members if you have them, and they are controlled by you.

Using this patch, the Golden Mushroom item is available! Your speed will max out!

Using this special patch, you can become one of the many apprentices of the following characters: Mario, Luigi, Wario, Bowser, Fawful.

Using this patch, you can recruit Geno and Mallow. However, these will replace two of your current party members if you have them, and they are controlled by you.

Using this patch, areas from the classic game Super Mario RPG: Legend of the Seven Stars will be added to the game. But, remember, Beware the Forest's Mushrooms!

Using this patch, you can add the optional Smithy Gang bosses to the game. However, this patch is only available if you buy the SMRPG Patch.

Using this patch, you can recruit all of Mario's partners from the classic N64 game Paper Mario. (They are all available, but you can only recruit three.)

Using this patch, the Cooligan class is available!

Using this patch, some of the Dark Star's power is transferred to your character and party, making them dark versions of themselves!

Using this patch, you can make your character stay in their baby class forever! (Works even if your current character is an adult.)

Using this patch, the Toady class is available!

Using this patch, you can get thief training under the advision of Popple.

The Fightmasters are a team of four of the devs of the game. They reside in the Mushroom Kingdom Dojo, and you can fight them at any time. They are the highest levels in the game, but don't do anything else but train and fight in the vicinity of the dojo. They are classes, gender, etc. like the rest of the Mushroom World, but there is usually something unusual about them. (Ex: The chief dev, named "YoshiEgg Nook" is a normal green Tanooki, but he has a green apron and a Yoshi Egg on it, referencing BPG's most popular series, the YoshiEgg Series.) If you defeat them, you get a large cash prize and a picture of you and your party up in the Dojo for all to see. 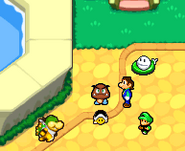 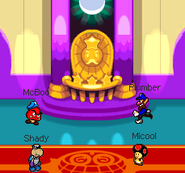 A screenshot, featuring four created characters.
Add a photo to this gallery
Retrieved from "https://fantendo.fandom.com/wiki/Mario_%26_Luigi_LIVE?oldid=2939963"
Community content is available under CC-BY-SA unless otherwise noted.