The next instalment in the Mario & Luigi series, is Mario & Luigi: The Reflection Section. The game, just like the previous 2, features a new world to be explored, aside form the main overworld: The Reflection World! In this game, the villain: Miokyne, attacks Crim City during a ceremony, and begins trapping people inside glass, mirrors and water, which can all serve as portals to the Reflection World. So, Mario and Luigi, team up various people along the way, but most importantly with a Mirrite named "Refi", allowing them to switch between the 2 worlds and finding a way to stop Miokyne's evil scheme along the way. 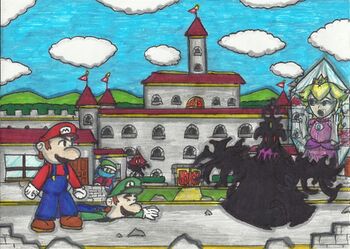 The game begins with a scene of Bowser in his Koopa Clown Cart flying over a bright blue sky, and appears to be alone, until Corporal Paraplonk shows up telling Bowser “Eh sir, you do realise that you’ve gone way too ahead of the rest of us! At the speed you’re going, you’ll burn up all your fuel before we even reach Peach’s Castle!”

Bowser laughs “Bah, like I’m waiting for you bozos to catch up! In case you haven’t realised, I’m kinda in a good ‘world-conquering’ mood right now! I can’t risk losing that before I even get to the attack! So why don’t you just MOVE YOUR B-” Suddenly a large puff of smoke puffs off the Koopa Clown Cart and a “crud” later, the flying cart falls straight from the sky and crashes into a rather strange location...

Bowser get’s up of the floor, realising that he just crashed into some sort of temple in vast desert of salt and water... “Argh, what the heck is this? Didn’t even realise I was flying right above this wasteland! Uh, this is weird, it’s like the sky is below me or something”. Sergeant Guy then swoops down to report that his troops are waiting above and that they’ll need to stop to refill his Clown Cart for a minute. Bowser regrettably understands and follows his former “Elite Trio”. But after they leave, a dark shadow drifts over the temple... and an anonymous voice echoes “Thank you for freeing me... you fool...”

Meanwhile, Mario wakes up in the morning where a greenish Toad called Inn T. welcomes him a good morning. “It’s been an honour having you stay here in Glasga Village! But today’s the day! The event in Crim City! Say, why don’t you make an early head-start? Luigi’s still taking a lazy nap in so... I’ll tell him when he wakes up! You run ahead, and I’ll be there later as well!”. Mario agrees, so with that he exits the house and leaves the village to the west (all while the villagers bid him farewell. This takes you onto Crimsway; a linear path which serve for some basic tutorial stuff like jumping and talking ect. After a short travel, you reach the event itself: Crim City! You are greeted by some tourists at the entrance who tell you that Peach is in the Castle.

So, you head straight to the castle, but at the entrance, Luigi catches up! ...By tripping over at the door in a true Comedic-Luigi Moment. With that, he joins you, and you continue heading up through the castle. However, along the way, a mysterious character with a green hat and a scarf wrapped around their head tells you “Beware of mirrors and windows... it’ll all make sense shortly”, and then walks of suspiciously.

Eventually they reach Princess Peach, accompanied by Toadsworth who welcome you to what Peach explains is the “Reflection Festival” will begin shortly. “Now, just as long as that oversized scoundrel doesn’t make an entrance here, thing should be fine!” Toadsworth is paranoid. Peach laughs and says it will be fine... so guess what happens next?

Suddenly, a dark shadow grows over the centre of the room, and from out the floor, a black, ghostly figure takes shape. “Hahaha, you spoke a bit too soon there princess”. “I’m not sure whether to be glad or not that it’s not Bowser... WAIT WHAT?!” Toadsworth panics. “Let’s make this quick. I am Miokyne, and from this moment on, this shall be my first bit of territory to retake!”. “R-retake? Hold on, this area hasn’t been ruled for centuries!” Princess Peach says cautiously. “Oh and now you Mushroom Kingdomers are planning to take the land for yourself because no else owns it formally? Well, in that case, I guess you could say that Mirranea’s King... HAS RETURNED!”

Miokyne then uses his power to smash the windows and creates crystal like objects with them. Luigi gets scare and tries to run away, but then, one of the crystals smashes into him, trapping him inside the reflection of the glass. “What is this Witch Craft!?” Toadsworth cries. Mario then heroically jumps forward, and so a battle begins. Here Toadsworth will explain the basics of battle. Afterwards, Miokyne gets angry, and traps Toadsworth and Princess Peach inside the glass crystals, leaving only Mario left, all while the surrounding castle begins falling in ruin. “Hmmm, your persistence reminds me of an old enemy... all the more reason to DISPOSE OF YOU!” with that, Miokyne finally traps Mario inside a crystal as well...

Later, Mario is still trapped inside the glass crystal, but the location is unknown. Thing is Mario can’t do anything! But lucky for him, at this moment, a strange hat looking spirit-thing, finds the crystal and enters the reflection. This allows it to meet Mario in the Reflection World. (Mario’s still trapped but it’s more like a cell inside the crystal). In the reflection, the colours of everything in the real world are inverted, meaning this area has bright white walls. The hat-spirit thing introduces itself as “Refi” and explains that she has come to help you get out, but she’ll explain the details later.

Refi gains Mario’s trust, in which she explains how the Reflection World works in correlation to the real world and how to use it to escape: “Okay, I can allow to go in and out of the mirror world at will, but there’s another cell outside of this crystal so, if you can exit the Reflection World in a certain mirrored area, then may be able to get out of here!”. With this in mind, you use Refi to escape the cell. With that, Refi tells you that they should also save other prisoners while they’re here, as well as finding Luigi.

Using this new ability to switch between the 2 world, as long as you are in front of something like, glass, crystals or a mirror, you soon reach the room where Luigi is (still trapped in the crystal), so you go in to free him, however Refi explains that in other people’s crystals, you need to destroy a glass lock by jumping at it; once that is done, you can free the person from the Reflection World. After a comedic Luigi moment of him missing his brother, the brothers rejoin forces, and get ready to save the other prisoners.

You manage to free many Toads and other people that were at the Reflection Festival, by taking them out of the Reflection World with Refi, and then freeing them with a Dungeon Key that you find. You should also find 10 attack pieces from Attack Blocks scattered around the area; Collect them all and Mario and Luigi get their first Special Attack, Red and Green Shells. After freeing all the people from their cells, and battling basic enemies along the way (Goombas/Shardas), you manage to escape the dungeon, and find out that the dungeon they just went through is actually just on the outskirts of Glasga Village.

However, the village happens to be swarming with many enemies, so Refi escorts everyone to an out-of-the-way shed, which actually happens to have stairs leading down into a secret sanctuary of sorts. Here Refi finally explains things: “You see I’m actually what’s known as a Mirrite; a being from the Reflection World, however, my appearance is a bit eh, how can say... NOT WHAT I SHOULD LOOK LIKE?! Listen Mario bros. I need your help or at least, Shella does!” Mario and Luigi look at each other as if to say “who?”. Refi continues “You see, I’m working with this girl called Shella; she’s determined to stop Miokyne, and I especially am the same, as you see, Miokyne is ALSO a Mirrite, although, more the ghost of one...”

“I’m sorry, this may seem sudden but we or... I need your help! If we don’t stop Miokyne then he could ehm... well, actually I really don’t know his goals and motives but I do know that we’re gonna be needing this ability to travel to the Reflection World a lot so I need to help you! I’m sure you understand, think about Princess Peach! You want to save her right? Well, what d’ya say? Will you help me?”. Mario nods heroically, but Luigi is not so brave in that sense... But with a bit of motivation from Mario, Luigi takes it upon himself to help out.

“Yay! I did good then? Master Shella should be proud then! Listen, Shella told me that once I got you, to meet her in the Arnolfin Hills! They’re just North of here, we can get they’re no problem! So ready?” Mario and Luigi nod surely, and with this strange, slightly uncertain goal, so begins the next big adventure of Mario and Luigi!

The main new mechanic is, with the use of Refi, to be able to switch between the real world and the reflection world. The way to do this is by going up to things like Mirrors, Glass, Crystals or Shallow Waters, and then using Refi to quite literally morph into a backwards world, mirroring the real one. The puzzles will often involve altering things in the Reflection World to change what mirrors it in the real world. However, you often also be saving Mirrites from the Reflection World, who like the Pi'illos in Dream Team Bros., will offer you help for saving them.

The other big new mechanic is Party Members. But they're not like Paper Mario. Instead, the partners are only temporary, meaning you'll depart from them eventually, and also, you can only have 2 party members with you at once. The switching bros. mechanic returns from the original Mario & Luigi Superstar Saga, but with more characters to do it with, it means that depending on how the characters are positioned, will effect what move you use. A lot of the time, abilities will be combined to make interesting outcomes for the abilities.

Party Members are a new addition to this series, but are still quite different from those of the Paper Mario series. Firstly, the party members aren't permanent, meaning they will depart at some point in the plot. Also, you can only have 2 Party Members with you at once, making a full group of 4. The abilities also work in a much different way, where you reposition the characters you want to use, bringing them to the front, front-middle, middle-back or back, to access different abilities. 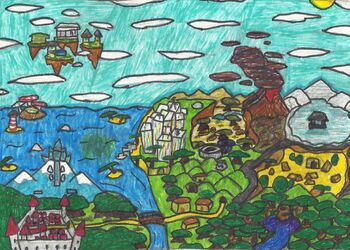 To the right is the World Map of the game, in the main overworld. Each area in the game also has a reflection world counterpart.

Retrieved from "https://fantendo.fandom.com/wiki/Mario_%26_Luigi:_The_Reflection_Section?oldid=3203158"
Community content is available under CC-BY-SA unless otherwise noted.