Mario & Luigi: Double Dimensions is a game for the Nintendo Switch  that was released on June 24th 2022 . It is the eighth installment in the Mario & Luigi series and the sixth in the Paper Mario series, making it the second crossover between the two, the first one being Mario & Luigi: Paper Jam for the Nintendo 3DS. As the second crossoever between the two series, this one is a remake of the Nintendo 3DS title that is more faithful to the original Ryota Kawade trilogy of the Paper Mario series, and takes place in the timeline of the first four Mario & Luigi games. As such, the main story revolves around Mario and Luigi, teaming up with Paper Mario and Paper Luigi in order to recollect the Star Chapters that were once part of an origin story.

The story begins with God ordering the creation of a galaxy that would only be accessed by certain individuals according to His specifications, one of those spcifications being followed by a book. His employees ask why this is so, he simply states that it might make a "great plot for a story". Cutting to the future, a wizard named Phantom Bopkincant creates an anitdote called Phantom Ink, it is a special serum that holds great power. And it gives live to whatever is drawn. With the use of this, Bopkincant, feeling depressed one night, instantly turns into a Ink Monster alongside his master called Master Grantruilda, creating certain monsters. These trickster Ink Monsters and their master then begin to jump into different pictures and books, pulling pranks and causing general havoc, invasion and mayhem across the Paper Mario world. Paper Mario and Paper Luigi head to Mushroom Castle and see what is going on, and find some drawings of new and bizarre enemies beating up the Paper Toads and Paper Toadettes, and stripping the walls as well as trapping Paper Peach and Paper Toadsworth in Ink bubbles. Paper Mario battles the creatures while his little bro, cheers him on.

In the Mario & Luigi world, Doctor Snoozemore and Prince Dreambert arrive on a holiday to the Mushroom Kingdom, where they show Princess Peach and her servents a machine they made called the 3-Demisor. Where an object that has 2D features can be placed inside the machine, where small little molecules called Flat-Syncers turn the object's 2D features into 3D. Mario and Luigi arrive fascinated at the sight. Toadsworth walks in and tells them that new bizarre and unknown creatures and lands all over the Mushroom World have fallen from the sky. Peach sends the brothers to find the culprit. They enter Toad Town and find a library, which holds every book in the Mushroom Kingdom. They see that it has been trashed and covered in pages, ink splatters and different Paper cutouts. Luigi spots a book and picks it up.

They head back to Peach's Castle and decide to place the book inside the 3-Demisor. The molecules try so hard to turn it's 2D features in 3D. But they try too hard and end up shooting pages out of the book, Paper-like People, cardboard platforms, trees, castles, houses and other objects join in the shootings.

On Ice Ice Illusion, a Paper Bumpty wonders where he is, surprising many Toads. In Sunbeam Plains, Captain Goomba is puzzled by the new recruits. In Doop Doop Dunes, several Paratroopas are impressed by their snazzy shaded counterparts’ flying kick.

After what feels like hours, the book finally finishes upchucking its inhabitants. Paper Peach and Paper Toadsworth crawl out from behind the machine, covered in Ink stains. The Toads are confused at first, though they eventually catch on who is who. Paper Peach makes her acquaintance with the real Peach and her subjects. Paper Peach then asks for the Bros to find some of her subjects.

As if someone higher up was cutting them some slack, Mario and Luigi find some scared Paper Toads and Toadettes in the main chamber of the castle.

Mario and Luigi bring the mushroom folk into the throne room. The Toads and Toadettes still shiver in fear, however, as several other inhabitants of their world, such as the Nomadimice, friendly Koopas and Bumpties, were captured by Bowser’s Minions. Thinking on it, Paper Peach realizes Bowser and his minions are also in this world, as the portal brought the paper inhabitants out in the middle of a fight they were having with some Danger Drawings. Upon realizing the danger Paper Bowser could bring about to both real and the scattered Paper people, Mario promises to help get them all back. Paper Peach also lifts their spirits by pointing out that her Mario is bound to turn up sometime.

The Bros try to stock up on some Bros. Items in the storage room. Unfortunately, Nabbit breaks and enters the castle, stealing all but two of the Bros. Items. While the Toads are thrown off by this robbery, Mario and even Luigi remain calm. The duo also learn the Paper people they’ve rescued are building something in storage.

On their way out of the castle, the Bros. bump into Toadette, now aspiring to invent giant Papercraft floats. Promising to help the bros with a giant Papercraft, Toadette is called away by the Toads and Toadettes. Said Toads and Toadettes give Mario and Luigi a strange Command Block called a Copy Block. Finally, a friendly Lakitu offers his assistance to the Bros. on behalf of Princess Peach. Finally all geared up, Mario and Luigi begin their Paper Jam of an adventure.

As soon as Mario & Luigi, enter Sunbeam Plains, they’re quickly met with adversity from two Paper Goombas. One of them, a particularly eager Goomba, takes a closer look. This turns out to be a mistake, as Mario & Luigi touch the Paper Goomba in a way that makes him uncomfortable- and that’s no good. Enraged by this invasion of privacy, the eager Paper Goomba and his close friend engage the Bros. To no-one’s surprise, and with maneuvers that recall a superstar saga, Mario and Luigi defeat the duo. While the normal Paper Goomba gets out of there, the eager one warns the Bros. he’ll rally up the trusted Paper Goombas to get them next time. Shrugging this off, Mario and Luigi solve a simple gate puzzle and continue onwards.

Thousands of miles away, at Bowser’s Castle, an especially fearsome Bowser is going over his new plan with his trusted Magikoopa mentor, Kamek. This mini-meeting is quickly interrupted by the Paper counterpart with attitude, Paper Bowser. This conflict of attitudes leads to an all-out brawl between the two titanic turtles. As the two scuffle, Kamek learns from a confused Goomba that many paper people and Bowser minions are pouring over the Mushroom Kingdom. With this, Kamek remembers a paper book he looked for long ago, yet gave up on- a book said to contain a parallel world. On a lighter note, Bowser Jr. also meets his Paper counterpart a few feet away. Unlike their dear old dictator dads, the Juniors do get along.

Back with the Mario Bros., the two battle normal Goombas who regard Mario as “the real deal this time”. Though the Bros win, they get no more info on the whereabouts of the other Mario. Nevertheless, they press on.

Mario and Luigi meet a Paper Toad shortly after. Who doesn't know where he is and doesn't remember what happened while he was in the Paper World. These continuing dead ends and hang-ups in leads come to a head when the Bros. come across the eager Paper Goomba. The eager Paper Goom- (You know what? Let’s just call him Perry. It makes it less annoying for you and me.) The eager Perry combines with his friends, brothers, sisters and second cousin into a Goomba Wheel. Mario and Luigi react by preforming a High Jump over the wheel, and mock them for failing. Perry gets really mad at this and is about to ram into the brothers, when.......he gets shot by.......Blizzard Midbus. Who is hot in the face and angrier than ever. Just when all seems lost, a thin, red angel descends from the sky- Paper Mario. Then falls from the sky is his little flat green rookie- Paper Luigi. The four of them battle him and win.

Midbus angry at the sight of there being two Marios and Luigis runs off to Bowser's Castle. Though that event is behind the duos form a fellowship, or a quartet of Paper Jam Bros. Paper Luigi leads the quartet, in-charge of the brothers. Allying to take down the twin Bowser armies and stop the Piglet and the Devil Drawings. With expert timing and a unique kinship, the quartet proceed onwards.

Speaking of the Koopa Kings, they arrive in their Koopa Klown Cars to taunt the Bros. The Bros try to follow the Bowsers, but the normal Koopa King's plan to burn his mortal enemies is put to a halt when Midbus arrives. Bowser is furious to see him and jumps out of the Copter and corners him. Midbus pushes him into a wall and the brothers watch as the two of them have a 1 on 1 physical fight. Bowser ends up punching Midbus all the way to Ice Ice Illusion.

The Koopa King then summons his oversized minion Petey Piranha.

Against Petey, the sunshine-liked Piranha Plant tries munching on the Bros, but the Bros keep up the burn. The Bros sometimes even topple Petey over, exposing his belly button.

Nevertheless, Mario and his Bros’ victory ends up pyrrhic, as the Bowsers still get away. All Petey leaves behind is a strange ? Card. Seeing it, the purple Toad explains the ? Card can become a Character Card if Mario has alien technology called NFC Reading, to be used with equally alien merchandise called amiibo. Realizing Mario and the forces beyond their comprehension might not have appropriate funds for these alien items, the purple Toad quickly mentions Mario can also sell these ? Cards for just Star Coins. The purple Toad finally leaves.

After the conversation with the Purple Toad ends, the plumbers head to the exit of the plains, and they see an open book sucking different objects inside it. A school of Paper Toads and Paper Toadettes walk by it and end up getting sucked inside the book, making it bigger, turning it into a void. Sucking the brothers inside it.

They end up in a place known as Rougeport. Paper Mario recognises this place as he has been here before with his little brother. However it doesn't really look that special and memorable like it used to be, when they were here the first time. There's still the inhabitants of the port, but they're looking up at the sky. Seeing the sights of all the 3D objects. A few of them are running away scared, while some Doogans don't care, and they keep staring up at the sky.

Paper Mario decides that they should head over to Professor Frankly's house. 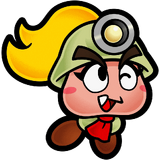 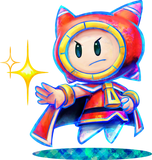 Toads
Add a photo to this gallery

European Boxart
Add a photo to this gallery

Add a photo to this gallery
Retrieved from "https://fantendo.fandom.com/wiki/Mario_%26_Luigi:_Double_Dimensions?oldid=3263229"
Community content is available under CC-BY-SA unless otherwise noted.