Mario & Luigi: Cosmic Chaos (also known as Mario & Luigi RPG 6: Dimensional Voyage in Japan and Mario & Luigi + Cosmic Bros. in Europe and Australia) is a title for the Nintendo 3DS, developed by AlphaDream in collaboration with Shooting Star Studios. It is the sixth title in the Mario & Luigi series. The plot of the game revolves around Mario and Luigi teaming up with their Cosmic Clones from a different dimension in order to prevent an evil being from completely mixing up the dimensions.

"In a world completely different to the Mushroom World, a big land exists, known as the Voeedian Kingdom. This kingdom is gobernated by an evil tyrant named Gorlassar. Gorlassar reveals a mysterious orb, from which he observes the space. He used to think that his kingdom was the only place with living beings, until he saw a different planet in his orb. With the help of his henchmen Tricky, Smarty and Psycho* he explored this planet, discovering a different species of living beings living in it. Figuring out that more dimensions with more planets had to exist, he decided to upgrade his orb abilities just a little bit more. Now capable of seeing beyond dimensional boundaries, Gorlassar discovers a world that really caught his attention... the Mushroom Kingdom's world..."

The basic gameplay is similar to past games, especially Dream Team and Paper Jam, maintaining traditional features in the series, such as the enemy attack avoiding techniques, Bros. Item usage, Badges, Bros. Moves and also out-of-battle techniques. The game introduces new techniques that require the Mario Bros. and the Cosmic Bros. to mix their abilities. The Cosmic Bros. have a strange ability that allows them to become shadows, and they are able to use this in order to become Mario's and Luigi's shadows and complete certain puzzles that require this ability. For example, Mario and Luigi can use the Cosmic Bros. as means of transportation over certain hazards by using their shadows, and also as a way to confuse overworld enemies. The cosmic shadows can also stretch themselves in order to reach normally unachievable items or important areas. In order to control the cosmic shadows, the player will have the Cosmic Mario and Cosmic Luigi silhouettes in the bottom screen, and will be able to perform their moves with the stylus. Several objects and obstacles can only be altered, moved or destroyed by the Cosmic Bros., and others only by the Mario Bros.

To start a battle, Mario, Luigi, Cosmic Mario or Cosmic Luigi must touch an enemy or perform a First Strike by jumping on the enemy in the overworld. A first strike will damage the enemy before the battle starts. Since the game is an RPG, players and enemies will take turns to attack each other. Using well  timed attacks can deal more damage to enemies. In the battles, players will control the four members of the group. Unlike in Partners in Time and more like in Paper Jam, Cosmic Mario and Cosmic Luigi will fight alongside but independantly from Mario and Luigi. There are now six categories of attack, as in Bowser's Inside Story. These are Jump, Hammer, Item, Bros. Attacks (for Mario and Luigi) or the new Cosmic Attacks (for Cosmic Mario and Cosmic Luigi), Bros. Badges and Flee. Similarly to Dream Team, an additional seventh option appears named Hint if the player loses a battle and tries again. Ranking returns, along with Lakitu in the level up system, as opposed to Dream Team in which he was absent.

Each character has his own HP, SP, POW, DEF, SPEED and STACHE points. When they finish a battle, they each gain EXP points and Coins. With enough Experience Points, they can level-up and increase their respective statistic.

New attacks that allow the four members of the team to perform special attacks by combining their moves. Most Cosmic Attacks have something to do with the Cosmic Bros. Abilities to turn into shadows and help Mario and Luigi perform more techniques. Not all Cosmic Attacks involve the four players, though. They are divided in Common Cosmic Attacks and Core Cosmic Attacks 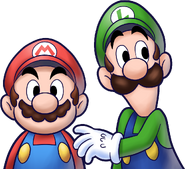 Mario and Luigi (from box cover).

Official artwork of the Mario Bros. and the Cosmic Bros. with Starlow.

Artwork of Princess Peach and Toadsworth, ambushed by Cosmic Clones.

From left to right: Psycho*, Tricky and Smarty. 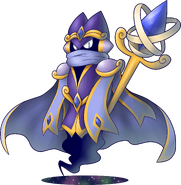 Gorlassar
Add a photo to this gallery 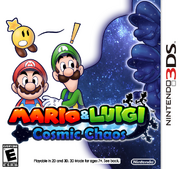 Box art.
Add a photo to this gallery

Retrieved from "https://fantendo.fandom.com/wiki/Mario_%26_Luigi:_Cosmic_Chaos?oldid=2704760"
Community content is available under CC-BY-SA unless otherwise noted.