Marina is an Octoling character who first appeared in Splatoon 2. Along with Pearl, she is a member of Off the Hook and serves as a DJ for the duo. The two of them have similar roles to the Squid Sisters of the first game, even hosting their own news segment and leading Splatfests. Unlike most Octolings, Marina does not appear to have malevolent intentions.

Marina has been a big fan of the Squid Sisters ever since the events of the first Splatoon game, during the fight between Agent 3 and DJ Octavio, which was apparently presented to her kin as a concert of their leader.

Marina's hair looks identical to most Octolings, but it is black like an Elite Octoling's hair instead of the usual red of a standard Octoling. Her hair is also dyed a light teal color at the edges. Like most Octolings, her eyes do not connect in the same way that Inklings' eyes do, but hers are a silvery color as opposed to green. Marina also wears a pair of teal headphones on her head. She has a short black vest with the zipper pulled most of the way down and black shorts that are low on her body. She wears teal leggings under her shorts and has black boots that, like her vest, have their zippers pulled down.

Marina seems to be more timid than her partner Pearl, but she still gets excited about things such as Splatfests. She also seems to be very calm and curious. 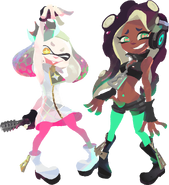 Promotional art of Marina and Pearl for Splatoon 2. 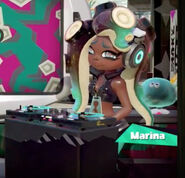 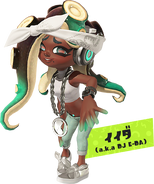 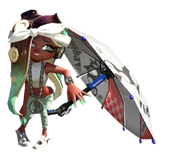 Marina with Octoling Armor (without the mask).

Marina with Octoling Armor (with Kelp)

Marina with Neo Octoling Armor (without the glasses).

Marina in her Octopus form. 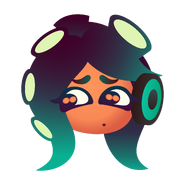 Dialogue icon. Only used in SplatNet 2.
Add a photo to this gallery 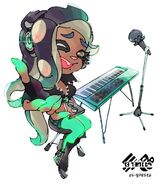 Retrieved from "https://fantendo.fandom.com/wiki/Marina?oldid=3340451"
Community content is available under CC-BY-SA unless otherwise noted.