Marill (Japanese: マリル Maril) is a dual-type Water/Fairy Pokémon. Prior to Generation VI, it was a pure Water-type Pokémon. It evolves from Azurill when leveled up with high friendship and evolves into Azumarill starting at level 18.

Marill is a small, blue bipedal Pokémon. It has a nearly spherical shape with a white belly, and has round ears with red insides. These sensitive ears can detect distant sounds. Its arms and feet are short and possess no visible digits. There is a blue, bubble-like ball at the tip of its zigzagging black tail. The tail is flexible and configured to stretch, and the ball is full of oil. The oil is lighter than water, and keeps Marill afloat in the water. In the anime, Marill was shown to be able to bounce on its tail.

Marill is able to swim in strong water currents without being slowed down by the water's resistance, due to its water-repellent fur. Marill feeds on aquatic plants in addition to fishing for food. When it dives, its tail can be seen bobbing on the water's surface. It will anchor its tail around a tree when fishing at the edge of a fast moving stream. It lives on the water's edge. 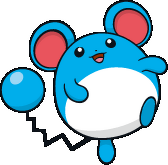