Maria Robotnik is Dr. Eggman's cousin and Shadow the Hedgehog's best friend. She is also Dr. Gerald Robotnik's granddaughter. Maria has a heart of gold. Maria has been Shadow's friend, ever since she was a little girl.

Once, the FBI came to destroy Space Colony ARK, until they found a way to live on Earth. The FBI then found out about Dr. Gerald's "Project Shadow." He said it was meant for good, and that it will help anyone in need of help, but they didn't believe him, so they were running to the escape pod room. They captured Dr. Gerald, and arrested him in Prison Island.

It is said to be "inescapable." Once Maria and Shadow find the final escape pod room, they discover only one of them is in the entire area. Maria told Shadow to get in while Shadow hesitated. He wanted her to come along too, but he did what she said. Her last words were "Shadow, please promise me, that when you reach Earth, to help and be kind to the people there. It is up to you to reach Earth alive and makes the people happy." Once she pulled the lever to release him, she was shot. Once Shadow reached Earth, he got amnesia, and took revenge on everybody.

After Shadow was cured of amnesia, Project Shadow was saw and he wanted to destroy the colony, by dragging it to Earth. Shadow then transformed into Super Shadow and with Super Sonic's help, he destroyed the monster, and saved the colony. After Shadow destroyed the monster, he lost all of his "Super Shadow powers" and plummeted to Earth with these last words: "Maria, this is what you wanted, right? I've kept my promise to you." All that was left of Shadow was one of his bangles that was on one of his wrists. 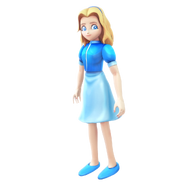 Maria by Nibroc-Rock
Add a photo to this gallery
Retrieved from "https://fantendo.fandom.com/wiki/Maria_Robotnik?oldid=3160963"
Community content is available under CC-BY-SA unless otherwise noted.