Mareep is a sheep-like Pokémon with fluffy cream-colored wool covering its entire body, as well as a curly tuft of wool in the middle of its head. Its head is blue, and it has black eyes. Its four feet are blue and have two digits on each foot, and it appears to be on tiptoe at all times. Its conical ears and tail have a yellow-and-black striped pattern. Mareep has an orange sphere at the end of its tail, which acts like a small light bulb. This sphere glows brighter the more electricity it has.

Mareep's wool, which grows continuously, stores electricity, rubbing together and building a static charge. Its volume increases when it builds up with electricity. Touching the wool when it is charged will result in a static shock. During the summer, the fleece is shed, but it grows back in a week. Air is also stored in its fur, which allows it to stay cool during summer and warm during winter. It tends to avoid battle in the wild and have mild dispositions. Mareep is most often found in grassy fields, though it can also be found in farms where its wool is used in high-quality clothing.

Mareep appears to be simply based on the lamb of a sheep. It is likely that its electric aspect and Ability comes from how wool builds up static charges and may also be based on the golden fleece in Greek and Roman mythology. It, and its evolutions, may also have been based on the title of the science fiction novel Do Androids Dream of Electric Sheep?.

Mareep may be a combination of Mary (from the nursery rhyme "Mary Had a Little Lamb") and sheep. Mareep is also an anagram of ampere, a unit of electric current.

Merriep may be a combination of merry, メー mē (the sound made by sheep), or Mary and sheep 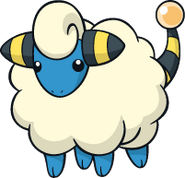 Sprite in Black, White, Black 2, and White 2
Add a photo to this gallery
Retrieved from "https://fantendo.fandom.com/wiki/Mareep?oldid=2251110"
Community content is available under CC-BY-SA unless otherwise noted.