Start a Wiki
Manic the Hedgehog is a hedgehog in the Sonic series. His first and only appearance was in Sonic Underground in an attempt to locate his mother, Queen Aleena the Hedgehog. He never appeared in a Sonic video game.

Manic makes an appearance in Sonic Heroes 2 as part of Team Underground. He is still trying to find Queen Aleena, but on this occasion his efforts are centered around locating Sonic who (to them) is missing. He shares this aim with Sonia, Tails and to a lesser extent Cosmo. 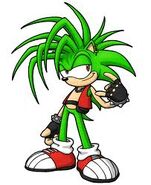 Add a photo to this gallery
Retrieved from "https://fantendo.fandom.com/wiki/Manic_the_Hedgehog?oldid=3170933"
Community content is available under CC-BY-SA unless otherwise noted.