View source
“Yes, I’m dark. But that... that doesn’t make me irredeemable. I’m resisting my dark urges. I could kill you with a click of my fingers. No, I want to kill you. But I can’t. Not if I ever want to be fixed. If I ever want her to be fixed. So don’t do this for me. Do it for the girl. Do it for Aurora.”
— Maleficent, Happily Ever After

Maleficent is a figure feared throughout the land for her cruel deeds and exceptionally powerful dark magic. Once a resident of Wonderland known as the Mad Hatter, she is now searching for the cure to the sleeping curse her love interest, Aurora, was put under.

Maleficent is a Latina woman of slightly above average height and a decent build. She has hazel eyes with a blue-green glint and long, wavy hair of a dark colour. No matter what alias she is under, Maleficent is rarely seen without a set of blue, tear-shaped gems on her outfit.

As Maleficent, her outfit consists of mostly dark, cool colours. Her hair is very long, and tied up thrice, with each golden band holding a tear-shaped gem. She wears a dark navy, sleeveless dress, ending above her knees. Her dress has panniers of a darker colour, and a bright blue ribbon around her waist. Over her dress, Maleficent wears a dark cape tied together with a tear-shaped gem. She wears dark green sleeveless gloves, extending above her elbows. Maleficent's boots are a dark blue, with purple soles that almost look like slippers. Two silver pads are held by brown straps on either boot.

Maleficent carries a large staff, roughly the same size as herself. The dark brown staff is topped by a stone figure resembling horns or a dragon, with a tear-shaped gem hovering above it. A thorny vine wraps around the staff, ending with a stone rose hilt.

Mad Hatter's outfit is much more colourful than Maleficent's. Her hair is much shorter, reaching to her shoulders. She wears an orange bow tie, and a blue waistcoat with her right sleeve rolled up, and a purple patch on the left elbow. Under this she wears a green shirt untucked with yellow spots adorning it. Mad Hatter wears green fingerless gloves, though the gloves cover her middle fingers. She wears wine pants with a light purple belt hanging from her left side. Her ruby slippers have golden soles and bands of silver holding the two tear-shaped gems in place. Mad Hatter's defining feature and namesake is her dark wine hat, around which a long green and red ribbon is tied. A piece of paper with "M/H" written on it is tucked into this ribbon.

The Mad Hatter never knew her family, and a lot of her past is a mystery even to her. In Wonderland, the three Weird Sisters noticed her powerful dark magic, and gifted her with ruby slippers embedded with magic gems to contain her magic and allow her to harness it safely.

After an undefined period of time, she met Cheshire Cat and the two bonded quickly, hosting regular tea parties. One day, a girl named Aurora encountered them. Cheshire and the Hatter took her in eagerly, and Aurora explained how the Queen of Hearts killed her parents. The Mad Hatter, who had taken a liking to the girl, decided to assist her in her quest for vengeance.

The duo infiltrated the Hearts' castle, where they met up with the Hatter's old friends; Jack and Jill of Hearts. Given the opportunity, the Mad Hatter made an attempt to kill Aoife - the Queen of Hearts - but was stopped by Aurora, who explained that she wanted justice, not revenge. After finding an enchanted map of the castle, the two retreated to think of a plan.

The details of what happened between Wonderland and the events of Happily Ever After are currently unknown. Somehow, some of the Wonderland residents ended up in the Arthurian Kingdom, and assumed lives of their own. Cheshire Cat was imprisoned in a secret vault in Wonderland, as was Aurora, who had been placed under a sleeping curse.

The Mad Hatter embraced her darkness and became Maleficent. She scoured the Arthurian Kingdom and the neighbouring lands for a cure for a sleeping curse. Along the way, Maleficent committed many atrocities, earning her the fear of everyone in the land and the title of the Mistress of All Evil.

Finally confident she has figured it out, Maleficent stole Aurora from the Queen of Hearts' vault. She stole magic beans from Jack - who now lives as a gardener, mourning the death of Jill - and set her sights on locating enchanted hair. The only other ingredient was light magic - but how could the Black Witch create light magic?

After tracking the enchanted hair down to the dwarf forest, Maleficent, under the alias of Malice, made her way there. After confronting Snow White, the tyrannical dictator who had placed the entire forest under a mind-controlling curse, Maleficent was bested in battle, and dragged off to the dungeons.

Maleficent is a cruel individual, who takes great pleasure in the pain of others. She will go out of her way to hurt others, and is glad to be feared throughout the land. Only once has she visited Jack - whom she was once great friends with - and that was to rob him. Her darkness drives her, encouraging her to do unspeakable deeds. Perhaps her only redeemable quality is her love for Aurora; a love which tears Maleficent apart every single day, thanks to her sleeping curse. Everything she does is for Aurora, but she cannot seem to find a line she will not cross to wake her lost love.

The Mad Hatter, on the other hand, is very unstable. Though she stays perky most of the time, the slightest thing can change her attitude. Mad Hatter will not stop talking if she can help it, and will often accidentally talk about events yet to happen, or things that don't exist in the Happily Ever After universe. She is very extravagant and fills the role of a comic relief. Her instability can lead to dire consequences, and her centuries of living has made it very easy for her to cast aside friends and allies.

Maleficent is exceptionally skilled with dark magic. Her talent is feared throughout both the Arthurian Kingdom and Wonderland. Maleficent's specialty is creating green fireballs, an ability that she frequently uses in combat. She is also very skilled at teleporting, and can teleport across the kingdom if needs be. Maleficent has created many creatures to guard her castle, such as a dragon as tall as the castle.

Maleficent has stolen many magical artefacts over the years. Her personal favourite is a raven pendant stolen from Aoife, which grants the user minor wind manipulation. 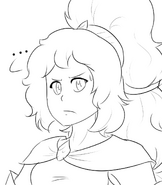 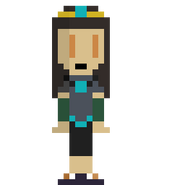 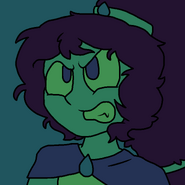 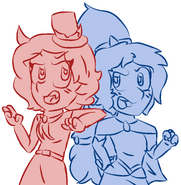 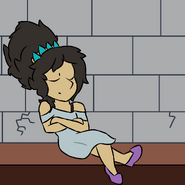 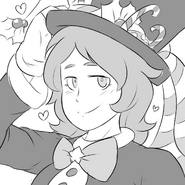