Majora's Mask is a mask that appeared as the central focus in the game of the same name. It was created by an ancient tribe as a form of hexing and torture.

The mask holds an evil deity of Termina with a mysterious past. Not much is known about him except that long ago he was sealed away inside Majora's Mask, until Skull Kid found the mask and put it on. Majora then began to control Skull Kid and attempt to destroy Termina by attempting to make the moon collide with the small land. Eventually Link stopped him and he was presumed destroyed.

Majora's Mask is first introduced after the Happy Mask Salesman removes the curse that was placed on Link by Skull Kid. The salesman explains that the mask is an wasn't just ancient artifact, the mas that was used by an Ancient Tribe for its protective rituals, but the mask was a 13 year old princess who was a granddaughter of the mighty dragon and a daughter of the wise chief. She was about to be a new leader of the tribe but her hatred uncle betrayed her and use the forbidden magic to turn her into the mask so he can use it to make himself invincible but he was defeated and was banished from the village. And now the people were afraid that its power became so dangerous to be used by anyone else that it was sealed away to prevent any thief from using it to bring great catastrophe. However, since the ancient tribe vanished, no one accurately knows the true nature of its power. The salesman fears the great devastation that could befall Termina if the mask is not taken back from the Skull Kid.

For majority of The Legend of Zelda: Majora's Mask, the mask is worn by Skull Kid on the Clock Tower, drawing the Moon to Termina. Although the Skull Kid is unaware, Majora's Mask is gradually beginning to take complete control of his mind, with his once harmless pranks becoming malicious acts of evil. Prior to the game's events, Skull Kid used the power of the mask to prank and curse others around him, such as Kafei

After the Four Giants are called, the mask abandons Skull Kid and enters the Moon so that it can push it through the Giants' blockade and complete its destructive path. Link then proceeds to follow Majora's Mask into the Moon.Once inside, he finds four children wearing the Boss Remains and one lonely child under a tree wearing Majora's Mask. If Link gives all his non-transformation masks to the four children, the child wearing Majora's Mask will give him the Fierce Deity's Mask. He will then take Link to the final boss room.

After the young hero and Tatl defeat Majora's Mask broken the spell and change majora back into her true form , they return to the land of Termina where the Happy Mask Salesman informs them that the evil inside majora has disappeared forever. Majora was happy to thank link and apologize to Skull boy. The three were heading home as the Happy Mask Salesman departs with it in his hands.

The Majora's Mask 3 : The Dark King

After beating Majora (The native from the Forest of Semoon who created the Majora's Mask) he will give you the power of Manipulation. To beat him is easy. He sings and chants. At the end of every chant, he'll charge. Simply step out of the way and ram into him or use you Deity Sword attack. Once dead, he will laugh and start to sing a scary chant.

The Legend of Zelda : Masked Curse

After being defeated by Link in Majora's Mask, he managed to escape by changing the Mask Salesman into a mask and take control of a kid. Link had to stop him whereas he tried to awake the evilest villains like Ganondorf, Vaati, and Ghirahim. He finally manages to control Vaati and have the Dark Sword and launch the moon into Termina. Luckilly Link is here to return to the past to cancel this and try to find the weapons to destroy him.

After a great battle, Link remove the spell from the mask to make sure that Majora will never be trapped again. 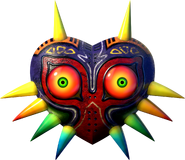 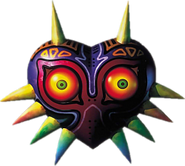 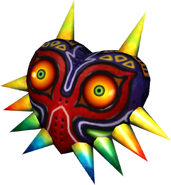 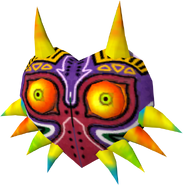 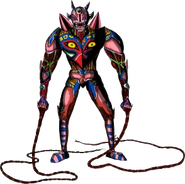