Major Burrows is a recurring boss in the Mario series, appearing in both Super Mario Galaxy and Super Mario Galaxy 2. He is a large, obese Undergrunt who wears a blue spiked helmet somewhat resembling a Spiny Shell. He is the leader of the Undergrunts, and as such mainly attacks his opponents from underground.

Major Burrows first appears in Super Mario Galaxy as a boss encountered in Gusty Garden Galaxy during the mission "The Dirty Tricks of Major Burrows". He and his Undergrunt army have invaded the galaxy, and Major Burrows himself is chasing a Star Bunny. Like normal Undergrunts, using a Ground Pound when he exposes himself will stun Major Burrows. Mario can then use a Star Spin to damage him. This sends him flying around the arena, and the battle begins.

Major Burrows will dig into the ground, and chase Mario from underneath. Mario must run to avoid being damaged, but like before, he can use a Ground Pound to stun him when his body is exposed. He will walk away from Mario while dizzy, so he must chase him down to damage him with a Star Spin. The second hit will cause him to get angry, with his eyes glowing yellow and his helmet turning red. He will dig faster than normal, and after Mario Ground Pounds him once, Major Burrows will start flailing his claws while rushing forward at a quick speed; Mario must use another Ground Pound to stun him. Another Star Spin will defeat him, saving the Star Bunny and granting Mario a Power Star.

Major Burrows is also rematched in Gusty Garden Galaxy's Prankster Comet mission, "Major Burrows's Daredevil Run". The battle is virtually unchanged, though Mario must not take damage, lest he loses a life instantly. Defeating him gives Mario another Power Star.

Major Burrows, alongside Dino Piranha, King Kaliente, Bouldergeist, and Fiery Dino Piranha, appears in Super Mario Galaxy 2, all of which are encountered in Boss Blitz Galaxy. In the mission "Throwback Throwdown", they must be defeated one by one to obtain the Power Star. Major Burrows is the third boss battled, and he uses the same tactics from Super Mario Galaxy. Major Burrows is also battled in the galaxy's Prankster Comet mission "Throwback Throwdown Speed Run", where he and the rest of the bosses must be defeated within five minutes. 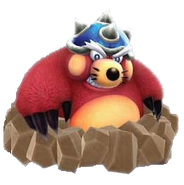