Fantendo - Game Ideas & More
Register
Don't have an account?
Sign In
Advertisement
in: Species, Characters, What is the New Fantendoverse?,
and 3 more

Magma Sentinels are a species of sentient rocks and lava, powered by the enigmatic Sentelenium. They make their original appearance in the New Fantendoverse and appear in several different projects. The Magma Sentinels are said to originate from The Bermuda Triangle, although their original location is somewhat enigmatic, as many tribes have split up across the Bermuda. The Magma Sentinels have had a long history of war, their 5000 year history taking them through different battles in the Bermuda. The latest battle was between Former Four's Troops, although as of late the battle has ended and they have been in a time of peace.

As of late, many Magma Sentinels have expanded out of the Bermuda, and have mainly inhabited North and South America.

Most of the Magma Sentinel's origins are up for debate, and aren't exactly clear. One thing that is clear, however, is that the first Magma Sentinel was a large, 6-armed Magma Sentinel who claimed to be "The Beholder". He expanded the Magma Sentinels for its first 200 years of existence, then dying to an unknown cause. Many think that The Beholder is some sort of deity, and the creator of his own race, somehow forming himself from magma and Sentelenium. Although, some just consider him a regular Magma Sentinel, being naturally formed and coining the name for himself, posing as a false deity. It's not exactly a light subject.

The Magma Sentinels have existed for 5000 years and have been under the pressure of war many times, contesting for land or for their life. The longest war was 700 years long, and went into the war between Former Four and his troops. War has hardened the Magma Sentinels, turning almost all of them into extremely worthy fighters, being trained from birth. 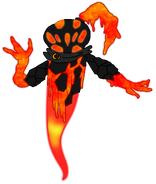