The Magical Bear series (known in Japanese as 魔法の熊, in Spanish as Oso Mágico, and in French as Ours Magique) is a fanon video game franchise made by Thorn Industries. It is also the one of the flagship series of Thorn Industries along with Magical Snowman. The games involve anthropomorphic animals and humans with magical powers & weapon of the elements in an alternate version of earth who fight the poachers and each other.

M.B. wakes up from hibernation and remembers his home the Bear Home World in modern day Greenland. The bear gets to to know the Union of the Animalia Kingdom and Deities. Once he gets home he finds it to have been raided by the poachers. He goes to get revenge on humans and along the way he encounters allies and enemies alike in the eight worlds in the game.

After winning Magical bear remembers his/her name to be Mark/Mary. When realizing this he/she also truly and fully realizes not all humans are bad so he/she has gained access to the internet and goes on a quest to stop overpopulation and overfishing.

Contrary to what the heroes belived at the end of the original game the poachers are still very much a thing. With the mains and some heroes gone this game is a free-world.

In an alternate universe the heroes failed to beat the poachers in MB3 and it is up to a bee and a goldfish to revive the heroes and collect more allies.

After the treaty of Paris which completly stops all poaching and after meeting Magical Snowman, the heros need to fix some problems with their world that remain.

A fighting game with many characters from the Magical Bear series.

Around 12-16 years later MB's (male) daughter is called by the dieties to be a hero like her father. Ohasaki, Hira, Jelena, and Parker awake with no memories in imagionation land (sounds fimiliar).

Like every other Thorn Industries games Magical Bear will have an anime in the future. 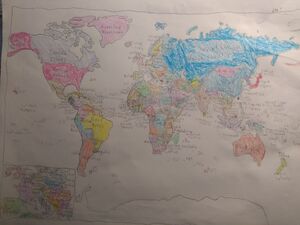 note: the map accurate at the start and most of Princess Bear.

Retrieved from "https://fantendo.fandom.com/wiki/Magical_Bear_(Multiverse)?oldid=3242401"
Community content is available under CC-BY-SA unless otherwise noted.