Magearna is a Mythical Pokémon from a currently unknown region, set to appear in an upcoming Pokémon movie alongside Volcanion. It bears a strong resemblance to Diancie, another Mythical Pokémon, and is said to be one of a handful of Pokémon made by men, predating ones like Porygon or Mewtwo.

Magearna is a metallic gray Pokémon with a slight pink hue, consisting of spheres. Its head is rimmed with a cog-like ring with seven teeth, and its head has a marking that resembles an eye. It features two large eyes with red sclera, pink irises and white, plus-shaped pupils. Its eyeballs have a pale gold rim and two eyelashes each of the same color. Placed on the back of its head are two metallic, gold-rimmed cover plates, opened in a way it resembles a set of ears.

It also has a rather large abdomen. The very top of said abdomen is marked with two large circular markings, while the rest of the upper half has two circular markings on each side, resembling the number 3 laying down. The bottom half is white as well, and seems to be an opening for its legs. Both halves of its abdomen are divided by a black lining and two halves of a golden ring, surrounding a circular plate with a shield-like marking. The abdomen largely resembles a Poké Ball as well.

It has gray, insect-like arms with round shoulders and a single claw. Its legs are pointy and have thick knees, making the legs resemble tacks.

Magearna is a Pokémon created around 500 years ago by mankind. It is one of the few Pokémon purposefully created by human beings.

Magearna likely takes inspiration from Karakuri puppets, mechanized figures dating back to the 17th century. Its appearance also gives a resemblance to certain gowns and dresses, with its abdomen being a long, wide skirt, its chest being a bodice and its shoulders resembling puffy shoulder sleeves.

"Magearna" likely comes from machina, Latin for machine, and gear. 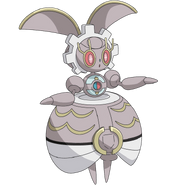