Madotsuki is the protagonist from Kikiyama's popular doujinsoft game Yume Nikki. Madotsuki is depicted as a hikikomori who never leaves her bedroom, something which causes her to experience strange lucid dreams whenever she falls asleep.

Like most of the content included in Yume Nikki, many things regarding Madotsuki is left a mystery; this includes both her identity and past. While her name is shown to be "Madotsuki" on the game's menu, this word is not typically used as a name in Japan as it translates to English as "windowed" or "aperture"; it may also be a reference to the Japanese colloquialism of a "windower", someone who often stares out of a window as they daydream. This may indicate that the name "Madotsuki" is meant to be symbolic as she acts as the player's window into the world depicted within the game, or metaphorical in the sense of her acting as the player's window into her dream world.

Madotsuki is a silent character who always seems to have her eyes closed. While imagery found within her dreams implies that Madotsuki may be a lonely and anxious young girl, the abstract imagery lends itself to interpretation and may not truly reflect her character traits. Regardless, many elements of her dreams seem to hint that Madotsuki is a depressed and unhappy individual who feels ostracized from society. Her loneliness and depressed traits are further reflected in the bedroom she lives in, which is rather empty and only consists of a television set (that gets no channels) that she uses to play the game NASU; a bookshelf; a desk at which she sits to write within the game's titular dream diary; and two doors, one of which leads to a balcony.

It is hinted within Madotsuki's dreams that she may be prone to acts of intense violence; this is most notably portrayed through the Knife Effect. The Knife can be used on almost every NPC present in Yume Nikki to varying results, and will cause any NPC she encounters to visibly panic or flee from her. This is especially notable since the Knife is only required for exploration purposes, and can often be substituted for other Effects (such as the Cat Effect). This is however also something that is purely the result of the player's actions and never a required action; thus it may be more symbolic of the player's psyche rather than that of Madotsuki.

However, all of the above is pure speculation as the elements of the game are left up to interpretation by the player.

Madotsuki is a playable character in Mario: Dance Floor Paranoia. In the Campaign mode, she is seen living in a tall apartment building in Shroom City. She is also selectable in Multiplayer mode. There are no voice clips for Madotsuki, instead the only sounds associated with her character are event sound effects from Yume Nikki. Mado's victory theme is a remix of the Flute theme.

Madotsuki appears as an unlockable playable character in Tamashī. As a melee fighter, Madotsuki fights wielding the Knife Effect, which, despite having little range, is one of the strongest melee weapons in the game. Madotsuki also has very high health, though her speed and defensive stats are very low. Her two special abilities see Madotsuki make use of other Effects from Yume Nikki, namely the Yuki-onna Effect and the Oni Effect, which act as a powerful defensive technique and a fairly strong, albeit hard to aim, offensive attack, respectively. 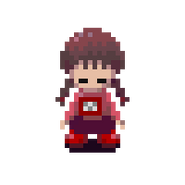