Start a Wiki
“Fufufufu... Were you all surprised to see my true form? My caterpillar body is only a sealed self of my beauty... You may need to reconsider about your stances before any one of you thoughtless interlopes will end up falling into the many layers of punishment.”
— Madame Mothana, Paper Mario: Stolen Worlds


Madame Mothana is a massive moth lady introduced in Paper Mario: Stolen Worlds as one of Wario's Super Henchmen. She is living in the Mass World, and she is shown to be bigger than any of the already big people in the Mass World, which may explains why she make herself a self-proclaimed empress of the Mass World, but is stuck with her new but weaker form, a Floofillar, by a mage to prevent her tyranny. That being said, she is recruited by Wario, who wanted a back-up heavy hitter (Wario himself is a heavy-hitter), and in exchange he will share the ownership of Mass World (although all treasures are his).

Although Madame Mothana is reluctant of the deal, she does want to get her beauty back, and wouldn't mind to lend treasures since richness is nothing for her when having the Mass World is already enough for her. Proving to be a frighteningly strong foe does to her massive size, even Mario and allies have troubles to keep up with her, but she have a very notable weakness; harmless light will attract her no matter what, and Bowser gaining Prism Power is a perfectly convenient timing to allow Mario and his allies to win in a three-way brawl.

Despite her eventual defeat, Madame Mothana remain confident and even help fellow Super Henchmen, especially in the Wario World, as she does not want to lose her deal just yet. After seeing Wario's not really wanting to seal the deals and after the fall of the W.I.L.D., Madame Mothana went back to the Mass World, unhappy with trusting a "nauseating, gold-hungry fraud".

Madame Mothana is a massive Mothus, bigger than normal Mothuses, and wears a royal gown with a fluffy moth-patterned scarf. She have a purple hair, brown antennas, and black wings with white spot. She also have purple eyelashes, purple shadows, and pink blushes. Madame Mothana have a pair of fangs, but only exposed when her jagged mouth is open.

As Floofillar, her fur are white, with the top having a gradient from purple to pink, have brown fluffy spikes, and light blue feet. She also have a nose not seen in her full form, and her fangs are perpetually exposed.

Madame Mothana is prideful and envious, wanting to be queen of Mass World because of her size and powerful abilities, no matter what would the other will say about her. Her pride will only shatter when someone managed to completely shatter her goals, and her breakdown, while rare, can range from sheer confusion to outright frustration.

Madame Mothana isn't always a smug lady despite her confidence; she prefers not calling other people by mean insults and focus on what are they doing, and will allow people to help her conquer the Mass World as long as they are proven trustworthy. She isn't very forgiving toward double-cross, as unless the traitor have a very good reason (and especially a life-or-death situation), she will not take another chance to allow the traitor to run loose. She will avoid doing double-cross herself unless if her partners aren't deemed as worthy to keep.

That said, her enviousness may never stop extending; there are words where she may want to conquer more than the Mass World since she wanted many people to admire her not just for her beauty, but also her power. Those who aren't willing to admire her would be ignored at best, or getting some public work at worst.

Despite all, she have a weakness. Not in term of "taking more damage from it" but more so distract her to higher degree. Harmless light in general is what distract her, allowing opponents to hit her before she realizes what is happening to her, unless it is too late as she gets knocked out. Harmful light, such as radiation or from dangerous sources like bug traps or lava, will do nothing on her as she can hear the sound of the dangerous products thus isn't distracted at all (though she obviously going to take great distance from them for her safety).

Madame Mothana is capable of using her Soft Spores which, while harmless, are so soft that not even the roughest fighter can resist it so easily and have the victims' ATK lowered by 2 for two turns. She can also emit a powerful bug buzz that can hit multiple targets, deliver a single but harsh slap, and blow a kiss that will stun anyone for two turns. She can also use some of her abilities as Floofillar, although not as much of extent.

Despite her massive size, she can also fly thanks to her wings, allowing her to hover over the ground level. This is convenient for Madame Mothana, as her massive size can become impractical or bothersome when traveling on the ground.

Although Madame Mothana is not a good singer (something even she will admit, albeit reluctantly), she can use her screech to her advantage to damage those near her and otherwise scare away people. This attack even affect the Audience, causing many of them to run away, and this attack have a 30% chance to inflict Stun for two turns.

Madame Mothana's first appearance. In the game, she is one of Wario's Super Henchmen and is set to be fought in her home world, the Mass World. She is first seen in her Floofillar form, trying to slow down Mario and allies by Wario's order. Although her Floofillar form may proven to be insufficient to defeat Mario and allies, her pride got the best of her and eventually, Madame Mothana realizes that she may not defeat them in her sealed condition. She doesn't announce her name, only known as Floofillar, until eating enough Magic Grapes that slowly heal her curse but convert her into a cocoon, and it is not until the 2/3rd part of Mass World story that she exit from her cocoon and fully recover her original, massive moth-like form.

It is currently unknown how she is exactly fought, other than the fact that Prism Bowser may get involved.

The End of Time?!

Madame Mothana is presented as one of the agents the player can utilize in the game, and she is a Charmer class character, being much more specialized unit for manipulating the enemies. Her abilities are unknown at the moment.

Her title of origin is only "Stolen Worlds" instead of the full title, possibly to avoid mention of Nintendo-affiliated materials. Nonetheless, she is the only character being originated by a "fan" game instead of an original game.

Madame Mothana appears in Super Mario Spikers as a playable character, appearing as a Skill-type captain. It is stated in her in-game bio that she demanded to compete in the Spikers League without being relegated to a boss fight, so she had to play in her smaller Floofillar form. She still retains elements of her final form, such as black wings with spots that allow her to fly around and purple clothing over her segments. Her emblem is a moth with black wings with white spots, much like her own, and her theme is Progressive Rock. 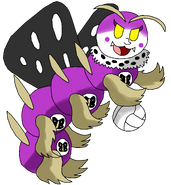 Madame Mothana, in her Floofillar form, in Super Mario Spikers 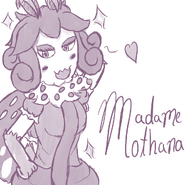 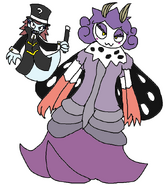 
Retrieved from "https://fantendo.fandom.com/wiki/Madame_Mothana?oldid=3196144"
Community content is available under CC-BY-SA unless otherwise noted.