Start a Wiki
Mad Moon (also known as Angry Moon) is an enemy serving as the lunar counterpart to Angry Sun. It resembles a moon with an angry face, inspired by that of the Moon from The Legend of Zelda: Majora's Mask. Mad Moon attacks by swooping at the player and shooting iceballs. 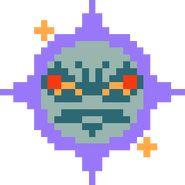 Retrieved from "https://fantendo.fandom.com/wiki/Mad_Moon?oldid=3185226"
Community content is available under CC-BY-SA unless otherwise noted.