It evolves from Machoke when traded. It is the final form of Machop.

Machamp is a bipedal, humanoid Pokémon with four well-muscled arms. Its skin is bluish gray, and it has red eyes and pale yellow lips. On its head, there are three, brown ridges right above its eyes. It has two arms on each side of its body: a pair located in the normal position, and another pair directly above that attaches on the top of the shoulders. It wears black briefs along with a golden power-save belt. Its legs have considerable muscle tone, and its feet have two toes.

Machamp punches extremely fast, throwing five hundred punches a second. With only one hand, it can move a mountain. Because of its four arms, it can hit from a multitude of angles and pin all of its foe's limbs at once. However, it has poor dexterity, and cannot handle delicate work without its arms becoming tangled. It is a rash Pokémon that rushes into action without forethought. Machamp can be found living in the mountains.

Machamp appears to be based on a bodybuilder or wrestler. Seeing as it has more than two arms and blue skin, Machamp might also be based on a Hindu god, perhaps Shiva or Vishnu.

Machamp may be a combination of macho (Spanish for overly masculine or chauvinist) and champion. Macho has come to mean tough or masculine in English. Akin to Mr. Mime, the masculine attribute has no reflection on gender assignment, as both species can be male and female; however, Machop's evolutionary line does have a 3:1 male:female ratio, making the species predominantly—but not entirely—male. The name may also incorporate the term Mach, referring to the high speeds at which Machamp can dole out its powerful punches.

Kairiky is a corruption of 怪力 kairiki (superhuman strength). It is worth noting that kairiki is the Japanese name of Strength. 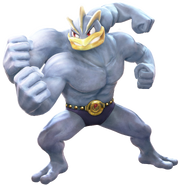 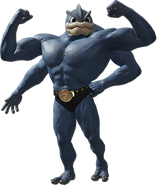