It evolves from Rockruff at Level 25. In addition, this Pokémon has multiple forms, depends on which game it was evolved in:

The opposite forms can be found in the wild in both games. In Generation 8, the requirement to own a specific version was removed, making Rockruff a simple day/night evolver à la Eevee into Espeon and Umbreon. The window for evolving the special Rockruff into Dusk Lycanroc also changed to between 7 and 8:00 P.M..

Lycanroc is a canine Pokémon resembling a wolf. It has three possible forms: a Midday Form, a Midnight Form, and a Dusk Form.

In its Midday form, Lycanroc bears a close resemblance to Rockruff. It has a white underbelly that extends up around its muzzle and eyes during a mask-like marking. It also has pointed ears with dark brown tips and pink insides, big blue eyes, and a triangular, dark brown nose. There are four sharp fangs in its mouth: two within the upper jawbone and two within the lower. Large tufts of brown fur extend from the edges of its head; three tufts on all sides. A bushy, white mane covers its neck. Four dark brown rocks extend of its mane, creating a shape almost like a stylized sun. The lower portions of this form's legs are white, and every foot has three dark brown claws. It also features a long, fluffy white tail.

In its Midnight Form, Lycanroc instead resembles a slouched, bipedal wolf or werewolf, with elements of zombies. It has short red fur with white on its lower legs, and a white streak that covers its face, underbelly, and tail. It additionally features pointed, button ears with black tips, three large tufts of fur on all sides of its face, a triangular black nose, and a mouth filled with sharp teeth. While the sclerae, irises, and pupils of its eye are visible, all of them glow a pinkish red and no distinctive colors are visible. A mane of fur covers its back and shoulders, sweeping forward over its head to make a crescent moon shape. On either side of its body, slightly below the shoulders, two small rocks resembling claws extend of the mane. A single, bigger stone projects out of the front of the mane over its head. Each of this form's paws has three black claws, and it's a stubby tail covered in long fur.

Dusk Form Lycanroc is a hybrid of the other two. It's orange and has the daytime form's appearance, but the nighttime form's personality.

In order to avoid needless fighting, the Midday Form prefers to measure alone and doesn't form a pack with others of its kind. However, it's a fiercely loyal partner to trainers that accept it during its unruly stage. In battle, it darts past opponents while attacking them with the rocks in its mane. These swift movements leave many foes bewildered.

In contrast, Lycanroc's Midnight Form is thrilled by battling, and becomes more excited the stronger its opponent. This excitement is what causes its eyes to glow. It strategy consists of closing in on its opponent and inspiring attack, then countering with a strong blow that knocks out its opponent. Trainers which will prolong its power earn its trust, but it despises people who it disagrees with or who attempt to force it to fight.

Accelerock is the signature move of Lycanroc's Midday and Dusk forms. In Ultra Sun/Ultra Moon, all three forms gained a second signature move in the Z-Move Splintered Storm Shards, an upgrade of Rock Slide that, at the time, was the only move capable of removing Terrain. 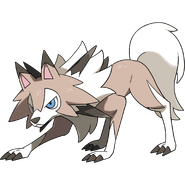 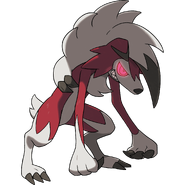 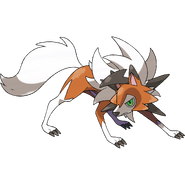 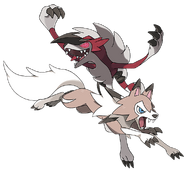