Lunala (Japanese: ルナアーラ Lunala) is a Psychic/Ghost-type Legendary Pokémon from Alola, and represents the moon. Its counterpart is Solgaleo.

It evolves from Cosmoem starting at level 53 in Pokémon Moon and is one of Cosmog's final evolutions. The other being Its counterpart Solgaleo.

It is the mascot Pokémon for Pokémon Moon and is able to enter the Full Moon phase.

Lunala is a white, chiropteran Pokémon with a head and a pair of large wings, both shaped like crescent moons. It has a pointy nose, and a dark purple, visor-like area with fuchsia eyes. A symbol resembling an eye also appears on its forehead when it attacks. Its head, wings and tail are endowed with a golden rim, and four points of its wings are endowed with a golden star. Its arms and chest are almost skeletal, and its wing's undersides are colored an indigo purple. A radiant blue light is seen on its chest too.

Lunala has been honored as an emissary of the moon since ancient times. It has been respectfully known as "the beast that calls the moon". Lunala is able to absorb surrounding light by spreading its wings, and resembles a beautiful night sky when doing so, glittering in the process.

When entering the Full Moon phase, Lunala will spread its wings in a way so it resembles a circle (like a full moon). Its indigo purple parts become a bright light blue and its golden parts emit a yellow light.

Lunala is based on a bat with a moon motif

Lunala comes from luna and ala, both Latin for moon and wing, respectively. 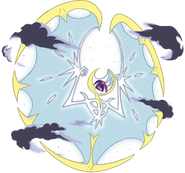 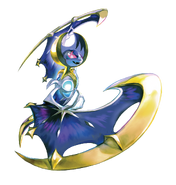