Lugia is the version mascot of Pokémon Silver, its remake Pokémon SoulSilver, and Pokémon XD: Gale of Darkness (as Shadow Lugia), appearing on the boxart of them all.

In Pokémon XD, Shadow Lugia, codenamed XD001, is a main part of the storyline, and Cipher's ultimate Shadow Pokémon.

Lugia is a large Pokémon that resembles a dragon, a plesiosaur, and a bird. It is primarily pale silver-white, but it has blue undersides with slightly varying tones. It has a ridged mouth similar to a beak, although it has pointed teeth on its lower jaw. Its head has a point to the back, and Lugia’s eyes have pointed blue or black spikes on them. Lugia has a long, slender neck and a smooth, streamlined body, with the exception of dark blue or black plate-like protrusions that run down the length of its back, and two smaller ones on the ends of their tails. It can fold back these plates to increase its speed. It has large wings that resemble hands. Though it is genderless, young Lugia has been observed, suggesting that there is a breeding population. Lugia has been shown to be fiercely protective of its young.

Lugia leads the Legendary birds. When they fight over territory, Lugia is the only Pokémon that can quell their ceaseless fighting, as observed in the second Pokémon movie. Much like the birds, it possesses the ability to control the weather; most notably, it can calm and give rise to storms. It is said that a light flutter of its wings is capable of causing winds powerful enough to tear down cliffs. If it were to flap its wings, it could hypothetically spawn storms lasting as long as 40 days. It is highly intelligent, and because of the devastating power it could accidentally inflict, it isolates itself deep underwater and tends to sleep in solitude. Lugia is the only known Pokémon that learns Aeroblast. It is extremely rare and is hardly ever seen.

Lugia's tendency for being underwater resembles plesiosaurs. It is also possible that Lugia is based on Ryūjin, a dragon who lived on the ocean floor and was the Shinto god of the sea. The two have similarities in mythology, and Lugia's Shiny colors (red and white) are the same colors as the coral Ryujin's palace was made of. The beluga whale, a white whale with a similar body shape and coloration to Lugia, may also be a basis for Lugia's design and name. Lugia's back fins and tail spikes are reminiscent of the Stegosaurus.

Lugia may be derived from lutetium (a silverish element), which in turn is named after Lutetia (the Roman name for Paris, the city of light). It may also involve Lugeo (Latin for to lie dormant, alluding to the way Lugia lies at the bottom of the sea) and luna (Latin for moon). Alternatively, it may come from beluga whale. 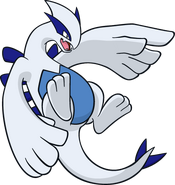 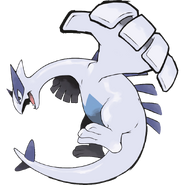 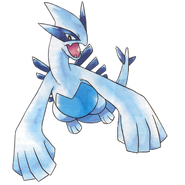 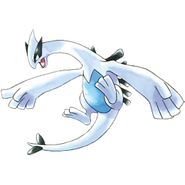 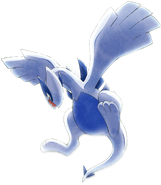