Lucky Veridian is one of hundreds of felines living in the quaint springtime village of Clovertown, located in the center of Quadrasera Island, a seasonal wonderland located west of Ireland's coast. Living in the home of Karis, his childhood best friend, and Karis' older sister Sytha, Lucky is a socially anxious recluse struggling to learn how to control a "curse" given to him in his childhood, one that gave him the ability to manipulate and control shadows. His incapability of controlling how his powers work, combined with what he believes is a lifetime of bad luck, has left him fearful of hurting others, leading to his limited contact with the outside world.

Lucky is the main protagonist of the 2020 platforming title Superstition, which follows him setting out on a journey to protect his island from the Omnis Clan, the invasive army of magical beings responsible for inflicting Lucky's curse on him as a child. In Superstition, Lucky begrudgingly joins Myortia Zavarell, a rebel among the Omnis army, in traveling across his island, and later to their home base Omnitopia, to vanquish the Omnis Clan and save his home. With the help of Myortia, Karis, Sytha, and Blitz Coronel, an avian hunter, Lucky defeats the Omnis Clan and liberates both Quadrasera and Omnitopia, at the cost of Lucky's mental and emotional wellbeing, leading to him almost killing his friends when he loses control of his powers. Following the story of Superstition, Lucky began seeking therapy for the first time, hoping to start leading a normal life after everything he put himself through.

Lucky Veridian was originally designed as a mascot character for a dormant idea for a game studio by .peachfuz (t∣b∣c). However, the character saw a complete redesign when the creator wanted to create a storytelling experience that reflected his own experience with social anxiety and neurodivergence, while also wanting to create a game that subverted tropes of the stories and characters seen in recent platforming games of a similar style, such as Yooka-Laylee and A Hat in Time.

For the first few years of his life, Lucky lived with his parents in the Autumnal Grove of Quadrasera Island, although he struggles to remember many details of this time period. His earliest memory was a particular day in his childhood where, one fateful afternoon a clan of mysterious sorcerers enacted a raid on his house, targeting Lucky and his parents. Lucky's mother and father were confirmed to be killed; the reason was later revealed to be that Lucky's mother practiced magic unbeknownst to the people of Quadrasera Island, and was considered a threat to the Omnis Clan's mission. Lucky initially escaped captivity, but was struck by a magical projectile that inflicted him with a "curse" that allowed him to gain the same ability to control shadows and attack with them; Lucky was seemingly spared by the creatures, but was left with the uncontrollable curse.

Following his escape, Lucky was discovered by Karis Nyjahh, a young cat exploring the woods, and his older sister, Sytha. Karis and Sytha's parents took Lucky in after failing to track down his parents, hoping to give him a normal life. However, a cavalcade of incidents involving Lucky's powers acting out against his will led him to slowly begin isolating himself from others, out of a fear of causing harm to those who don't deserve it without meaning to. Unable to teach himself how to control them, he found this to be his sole coping mechanism, and he never wanted to risk the irreversible damage he could cause with his magic.

This mindset followed him into adulthood, as he moved in with Karis and Sytha when they acquired a house for themselves in Clovertown, a springtime village on the opposite side of his home island. Although Sytha and Karis regularly encourage him to pursue therapy and slowly phase himself into less intensive social experiences, Lucky remains anxious, afraid of losing control. It's implied that he was born with a social anxiety disorder that was intensified by his fears surrounding his powers.

Lucky appears to be an anthropomorphic cat, with matted fur of a dark green color, and a lanky stature. Noticeable patches of his fur on his chest, hands, feet, and the tip of his tails are lighter than the rest. His blue eyes have a noticeable curved shape to them, slightly reminiscent of crescents, and a tuft of his hair forms a cowlick on the top of his head. He has dark whiskers by his heart-shaped nose; his ears are perky and pointed. His tail curls at its end, giving it a unique “clumped” shape. In Superstition, Lucky wears a red collar with a small bell with his initials attached to it, and a bandage on his left arm; the bandage conceals a burn injury caused by his most recent attempt to learn how to control his powers. In the colder areas of the game, Lucky wears a yellow scarf over his collar, said to have belonged to Karis.

Prior to and during Superstition, Lucky Veridian is skittish, soft-spoken, and anxious of social situations and the future; he's quiet and careful at his best, and a complete nervous wreck at his worst. Lucky's social struggles give him difficulty with approaching others or opening up about himself, unless he feels genuinely comfortable around them. He's prone to overapologeticism and overreaction, and is a chronic worrier; he's also typically clumsy and uncoordinated, due to his inexperience as a warrior prior to Superstition. His lack of confidence makes him flustered in the face of positive reception and flirting, as he isn't exactly used to compliments from strangers. Most of all, however, Lucky is deathly afraid of his powers and his inability to truly have control over them, terrified of the prospect of hurting others without intention. Out of this fear, he has pushed away most of the people in his life, and is hesitant to form new relationships with others. His fear of other people getting attached to him can lead to him acting irrationally and rebuffing their attempts to connect with them.

At his core, however Lucky is a truly caring, good-hearted person with more internalized optimism than one may think. Although he tends to be pessimistic in the short term, he expresses hope that, eventually, he will overcome his anxieties and, slowly but surely, learn how to open up to other people, and learn how to live his life without fear holding him back. This drive pushes him to decide to join Myortia on an adventure in the first place; he believes the experience will help him grow as a person, and help him grow into "a person he actually likes". He may still have a ways to go, but his refusal to succumb to hopelessness is what keeps him going.

Throughout Superstition, Lucky experiences drastic, dynamic changes in his personality similar to a roller coaster–constantly switching from getting better to getting worse. Myortia's training helps in learn how to control his powers, allowing him to slowly adjust to being around others without fear, and, as such, he finds himself able to form a friendship with both her and Blitz Coronel. However, the stressful weight placed on his shoulders caused by the expectations of him to defeat the Omnis Clan, Myortia's lack of understanding of his anxiety, and the intensity of the journey begins to take a toll on him, even with Blitz and Karis keeping a close eye on him. The stress begins to collapse on him near the tail-end of the journey, when the mounting pressure, combined with the emotional fallout of learning the truth behind his curse and his parents' death, causes him to completely spiral out of control, and allows his anxiety to completely take over, "transforming" him into "Black Cat". Following this transformation, Lucky is seen at his most vulnerable, completely overcome by his emotions and his fears.

However, change comes in good packages, too. Following Superstition, and Lucky's decision to begin seeking treatment for his emotional wellbeing, as well as to start integrating himself more into the Clovertown community, the improvement is astronomical. Although Lucky's anxiety is still present, his control over his powers, his emotions, and his actions is much stronger. While he does remain modest and somewhat soft-spoken, he's a much brighter, affectionate person without the fear that's dragged him down for so long. It's made apparent that he's in a much better place at this point, and the on-screen results make this very clear; Lucky is both healthier and happier.

Because of the curse that was inflicted on him as a child, Lucky wields erebokinesis, being able to manipulate shadows in combat, as a form of dark magic. Initially, Lucky is unskilled in his powers, as his fear of hurting others prevented him from ever using them, but, under Myortia's training, he learns several erebokinetic techniques: firing shadow projectiles, and “teleporting” in and out of shadows, among other abilities. Thanks to her training, he becomes more well-versed in combat. Lucky is also capable of scratching enemies with his claws.

Lucky and Karis have been practically inseparable ever since they first encountered each-other as children: some outsiders assumed the two were biological brothers, but, outside of their childhood kinship, the two never considered each-other as genuine family. Karis has grown to understand Lucky's anxieties and fears over time, and is determined to take good care of his friend, often acting as his emotional support. Lucky, on the other hand, admires Karis' infectious positivity, and it often rubs off on him; he has always held their friendship very closely, as Karis is one of his few only friends.

Lucky slowly developed romantic interest in Karis as he got older, though he had a hard time coming to terms with his feelings, as he feared that a relationship with anyone, especially with Karis, would only be to the detriment of both himself and his partner. As such, he kept this crush on the down low, though Sytha eventually did piece things together and figure out that Lucky crushed on her brother.

By the end of Superstition, Lucky's attraction to Karis seems to have waned somewhat, as Lucky stated he gave up on pursuing Karis, and instead realized he was in love with Blitz Coronel. Sytha later theorized that Lucky mistook platonic love for Karis for romantic love, because, at that point, Karis was the only person who Lucky received regular affection from.

Despite not being nearly as close as Karis is to Lucky, Lucky has grown to become comfortable around Sytha as he grew older and, eventually, moved into her home with Karis. She treats Lucky the same way she treats Karis–as a little brother–and, as a result, she's formulated a tight familial bond with him. She's grown to be overprotective of him, with the understanding that he is a fragile person, and is understandably wary of Myortia when she goes on his adventure with him. Lucky often goes to her for advice, and often confides in her how he feels about Karis, because she claims that, "she knew Lucky had a crush on him before he did".

A ton of users did art for Lucky for a community draw here! Check it out! All other outside art is posted below.

Lucky as he appears in World Tournament. Art by Exotoro (t∣b∣c). 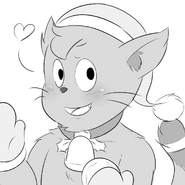