“I can tell you will continue fighting as long as you remain on this planet. A shame- I have no choice but to remove you myself.”
— Lucius, selection quote

Lucius is one of the most prominent characters in the Heroforce franchise, acting as one of the game's primary antagonists before becoming a friendly rival and ally to Fera later on in the story. Within promotional material, he is given about as much emphasis as Fera herself, and essentially acts as Pyro Enterprises's secondary mascot for the game.

Under most circumstances, Lucius comes off as friendly, or at the very least rather aloof. He tends to greet people in a positive manner, his quirky manner of speech showing off more of his scientific side. Though he tends to get along well with others, he's not very open about himself and rarely brings up his true feelings, though he is more than willing to aid and talk things out with others.

Considering Lucius has spent multiple centuries in cryogenic slumber and has witnessed the death of his own race, it is logical that he seems to suffer from some case of modified PTSD. When hyperfocused on something concerning his own safety or the safety of others, he becomes much more serious and direct, dropping his affable nature and becoming aggressive. Notably, this doesn't seem to change his desire or willingness to kill; in fact, he's equally as likely to kill someone when acting more amicable than when he is deadly serious.

As a Coronid, Lucius resembles an especially pale and scrawny human at first glance, having noticeably pointy ears and thin limbs. His major distinctions tend to stem from his skin and internal organs; his bones are a pitch black, seemingly save for his teeth, and the interior of his mouth is also incredibly pale. He has a strange off-color blonde hairstyle, which is wild and spiky and decorated with a traditional Coronid braid on the side of his head.

Lucius's traditional garb consists of Coronid commoner's clothing, being a green robe and baggy pants with wrapping around his upper arms and lower legs. He is most commonly seen either barefoot or wearing cloth coverings resembling ancient Japanese footwear. Short flashback sequences showcase Lucius in longer, more ornate robes with a slicked-back hairstyle, with the implication that this is his official scientist garb.

Lucius considers his primary strength to be his intellect and quick analysis skills, owing to his specialty in physics and biology as a royal Coronid scientist; this gives him the ability to quickly size up any given situation or how an opponent's fighting style works, letting him subdue them easily or use their momentum against them. Naturally, he is skilled in the more purely scientific aspects of these fields as well.

His primary offensive tool stems from his ability to manipulate "plasma", which manifests as a green flame or light source that emanates from his body. This does not seems to be the typical definition of plasma, as the energy is implied to rely on both Lucius's neural system and that of his targets; as such, it runs on the electrical energy naturally coursing through a living being's body, converted to an intense heat for offensive or tactical purposes. Lucius manifests plasma in his attacks by throwing spheres of the substance, firing off lasers, or by manifesting flame-like blades over his fingers. He is also capable of creating explosions using plasma, though this takes a bit more setup to perform and requires him to speak in Coronid.

Lucius is rather physically frail due to his bone structure, and while he is agile, his body is not very durable, and he focuses on dodging attacks rather than blocking them.

Lucius's debut appearance in the Pyroverse. Though he is set up as a major character, not much of his story is explored, as the game is more built around gameplay than story.

Heart of Iron expands Lucius's role significantly, playing him up as the secondary main character of the story and expanding upon his past and history with Corona. 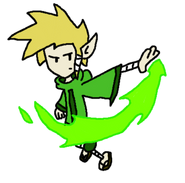 Lucius as he appears in Doom Dome Battle. Art by Crispycol (t∣b∣c).

Bunny Day Lucius by Exotoro (t∣b∣c).
Add a photo to this gallery

Retrieved from "https://fantendo.fandom.com/wiki/Lucius?oldid=3176622"
Community content is available under CC-BY-SA unless otherwise noted.