This page refers to the character from the Fire Emblem series. For the characters from the Mega Man Turbo series, see Lucina & Trance.

“I challenge my fate!”
— Lucina

Lucina is the daughter of Chrom from the future and has the mark of Naga, known as the Brand of the Exalt, on her left eye. She is a kind and determined princess with a strong sense of justice, who believes that saving the world is her mission. She loves her father dearly and is always worrying over him. Her sword, the Parallel Falchion, was originally thought to be a separate weapon from Chrom's Falchion, but was later revealed to be a version of the same weapon brought back from the future. Her birthday is April 20. Depending upon whom Chrom marries, Lucina can be the sister of Male Morgan, Inigo, Cynthia, Kjelle, or Brady, or be an only child. She is also Owain's cousin and possibly Female Morgan's cousin as well if the Avatar marries Lissa or Emmeryn.

Like the present timeline, Lucina was born to Chrom and his wife nearly a year after the Ylisse-Plegia War. She had a special bond with her parents, especially Chrom who taught her swordplay. After Chrom's death at the hands of the Grima, Lucina inherited the Falchion and attempted to fight Grima. Lucina never learned who killed her father, however her only clue was that her father's murderer was someone close to him. At some point, her mother was also killed in battle. With the world on the brink of destruction, Lucina was down to 11 of her closest allies, the other children of the Shepherds. Naga approached Lucina and her comrades and opened a portal into the past as a last ditch effort to prevent the resurrection of Grima. To hide her identity, Lucina altered her hair, donned a mask from Gerome to hide her Brand of the Exalt, and took up the namesake of her ancestor, Marth, in order to hide her identity but still help save the world. Naga sent her and her comrades through the Outrealm Gate into the past. However, anomalies in the flow of time due to the presence of Grima and his Risen army following the children caused her to be separated from her friends. When the Outrealm Gate finally opened, Lucina arrived in the past shortly after Chrom had just recruited his most trusted ally, the Avatar.

Upon arrival from the future, Lucina instantly comes to Chrom and Lissa's aid when a Risen nearly kills Lissa. However, before Chrom can thank her, she temporarily leaves, Leaving Chrom, Lissa, Frederick, and the Avatar to fight off the Risen. After the battle, she introduces herself as Marth and then promptly leaves, warning them of greater dangers to come. Later, during a tournament at Arena Ferox, Lucina defeats Basilio's original champion, Lon'qu, thus becoming his new champion for the tournament. Chrom defeats her in the tournament and once again, she leaves. After the Shepherds rescue Maribelle, Plegia plans an assassination on Emmeryn. Lucina appears before the attempt and earns Chrom's trust by killing an assassin nearby trying to kill him; however, a second assassin appears and slices her mask off, but Chrom kills the second assassin. Lucina fights alongside Chrom during the assassination, lead by Validar, and successfully protects Emmeryn. Believing to have altered the future, Lucina leaves. However after Emmeryn's sacrifice at her execution, Lucina realizes that the timeline is now set back on its course.

Two years after Gangrel's defeat by the hand of Chrom, the present timeline's Lucina is born to Chrom and his wife.

After talking to the new king of Plegia, Validar, Chrom and the Avatar prepare to depart the next day. That night a group of Risen ambushes Chrom's army. After clearing nearly all of the Risen, a Risen assassin suddenly warps behind him, but Lucina steps in and protects her father. Chrom is still curious as to who she is and Lucina can no longer bear to hide her secret from him. Lucina tells Chrom to look into her left eye. As he gazes closely into her eye, he sees the Brand of the Exalt, the exact same one that his infant daughter has back at Ylisstol. Lucina begins to tear up, but Chrom warmly wipes away her tears. Lucina finally embraces her long lost father, weeping in his arms. After, Chrom brings Lucina to her mother who cannot believe that she is their future daughter. Nevertheless, after seeing the Brand in her eyes, her mother happily accepts Lucina and the two embrace each other. Collecting herself from the reunion, Lucina reveals to Chrom, the Avatar, and Lissa of the apocalyptic future she came from where the Shepherds were all killed, leaving behind only their children. With the resolve to change the future and to protect her parents, Lucina joins the army.

After liberating the Steiger Fortress, Chrom receives alarming news that the forces up to the north were crushed by Walhart's forces. When Khan Basilio volunteers to stall their army, Lucina steps in to try and stop him since, in her timeline, Basilio perished when he went. Nevertheless, Basilio's resolve is stronger than Lucina's warning, though Flavia decides to go. Soon after, word arrives that despite the different events, Basilio was slain regardless. Remembering his sacrifice, Chrom's army finally take down Walhart's forces, once and for all.

Fate of the World

After preventing Walhart's Conquest, Validar sends a message to Chrom so he can give the final gemstone for the Fire Emblem. Upon reaching Plegia's castle, Validar betrays the group and tries to seize the Fire Emblem from Chrom, forcing them to flee. Chrom, the Avatar, and Lucina nearly make it out of the castle, but Validar warps in and weakens Chrom. Validar orders the Avatar to seize the Fire Emblem and the Avatar does against their will. After seeing the event unfold, Lucina realizes that the Avatar was the one who murdered Chrom, despite that act was against their will. Lucina reluctantly decides to kill the Avatar to prevent this, who can choose to accept her judgement or not. Regardless of the Avatar's choice, as she is about to kill the Avatar, Chrom, who watching the scene unfold steps in and stops her. Lucina does her best to convince her father that killing the Avatar is for the greater good, but Chrom places his trust in the Avatar, and Lucina puts her faith in their bond to overcome what lies in the future. Alternatively, if Lucina is married to the male Avatar, regardless of his choice, she will not go through with it when the Avatar makes his last request for her to find someone to keep her happy. In addition, if her mother is the female Avatar, regardless of her choice, Lucina cannot bring herself to kill her own mother.

Later at The Dragon's Table, Lucina witnesses the Avatar killing Chrom again and cries out in horror. She then learns that this was all a ruse by Chrom and the Avatar and they swiftly defeat Validar. However, a mysterious black figure warps in and takes on the appearance of the Avatar. Grima reveals that he is indeed the one who possessed the Avatar in the alternate future and followed Lucina into the past. He is able to revive the dragon body of the present Grima, causing Lucina to look in horror as she remembered what had happened in her future. Nonetheless, all is not lost, as the Avatar manages to take the Fire Emblem from Validar so Chrom can complete the Awakening Ceremony. Now with the power to take down Grima, Lucina aids Chrom and the Avatar for the final battle with Grima.

After defeating the Fell Dragon, if Lucina is not S-supported with anyone, she goes to Ylisstol and whispers to her infant self that she will live a better life than she did and promptly leaves, leaving no trace of what happens to her after.

Lucina appears as an NPC in this game.

Lucina and Chrom appears as the main protagonists.

Lucina appears as a Pair Unit teaming up with Chrom.

Lucina is one of the default characters in the game.

Lucina appears in Super Smash Stadium, solely as an Echo Fighter for Marth, just like in Ultimate.

Lucina is a strong willed and driven woman who is determined to alter the dark future she came from. Due to the countless deaths and horrific events of the future, she dislikes any form of death, even "noble" ones. Her main motivations comes from her love for her parents, especially Chrom. Lucina is willing to do whatever it takes to see that Chrom stays alive, even if it means going against her wish for no needless deaths. Nevertheless, she is obedient to Chrom and puts her trust in her father's judgements. Lucina bears a resemblance to Marth and has been mistaken as him by Tiki when she is introduced. Tiki also remarks that her involuntary actions around camp when helping others further likens her to Marth himself.

Despite her serious and stoic persona, Lucina has childish moments around her parents and siblings in their supports. In fact, she is paranoid of the female Avatar if she is not her mother, worried that she'll steal away Chrom from her mother because of their close relationship. Lucina has a rather dry sense of humor, and is the least likely to get a joke out of everyone in the Shepherds. 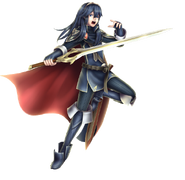 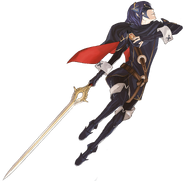 Lucina, as she appears in The Stories of New Tendo City 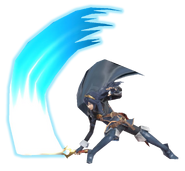 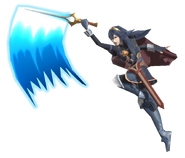 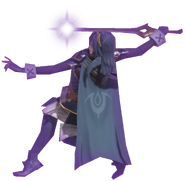 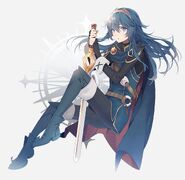