This article refers to the character of Lucas from MOTHER 3. For other instances of the name Lucas, see Lucas (disambiguation).

Lucas (Japanese: リュカ Ryuka) is the 13 year-old protagonist of Mother 3, a game in the EarthBound/Mother series. He has the gift of PSI, powerful psychic powers, and his signature PSI move is PK Love. Lucas is from the small Tazmily Village located in the Nowhere Islands, and he is the son of Flint and Hinawa and the twin brother of Claus. His journey in Mother 3 officially begins when his mother, Hinawa, passes away due to a Drago Fang (later revealed to be a Mecha Drago), causing great grief to not only him, but to Tazmily Village entirely. In Chapter 3 of Mother 3, he ultimately saves Salsa, Wess, and Kumatora's lives by summoning a Drago to rid them of Fassad and some Pigmasks, and is then thrust into the role of main protagonist in Chapter 4, where he ventures to Club Titiboo to find the mysterious bassist who may (and turned out to be) be Duster. Then, after going through several perils to stop the Pig Army and pull the Seven Needles, saving his village and, ultimately, his world.

In Mother 3.5, Lucas's own willpower altered a miniscule fraction of his genetic makeup, enabling him to release the Seven Needles without causing the ultimate destruction Porky Minch had intended.

Lucas returns as a playable veteran character in Super Smash Bros. Calamity with an all new moveset, with PK Ground being his down smash, Offense Up as his neutral special, and PK Freeze as his side special. 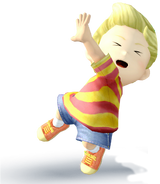 Lucas as he appears in Super Smash Bros. Calamity. 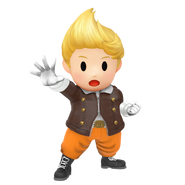 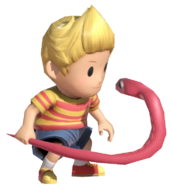 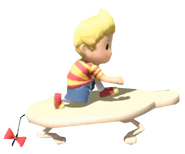 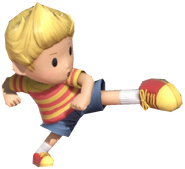 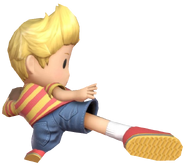 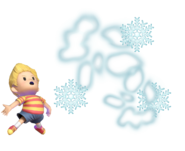