Lucas is a playable character in Super Smash Bros. Calamity. Lucas is the main protagonist of the Japan-only Mother 3 game for the GameBoy Advance, though he is not playable until after the first three chapters, where Flint, Duster and Salsa were playable in. Lucas is the son of Flint and Hinawa, and is the twin brother of Claus (also known as the Masked Man).

New taunt which is his standard taunt, Lucas focuses and starts recovering damage using PSI energy. The taunt can be extended by holding down the taunt button.

New up tilt, a flip kick which can be used for combo potential.

New down smash, PK Ground, which can bury opponents, setting them up for combos.

Neutral special is now Offense Up, which is a charge move and increases the damage of his smash attacks, albeit the effect wears off if a smash attack misses.

PK Freeze is now Lucas's side special, but acts similar to PK Fire.

PSI Magnet now deals damage to opponents inside the barrier. 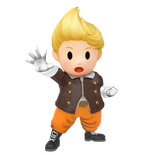 Add a photo to this gallery
Lucas has two alternatre costumes based on the Masked Man, which makes him use his sword in his side smash, and Kumatora. While Kumatora plays similarly to Lucas, she is acknowledge as a separate character by the audience and announcer.

Retrieved from "https://fantendo.fandom.com/wiki/Lucas_(Calamity)?oldid=2567649"
Community content is available under CC-BY-SA unless otherwise noted.