Loudred are medium-sized blue creatures that are somewhat "boxy" in shape. They have a huge mouth with yellow lips and peg like teeth on each corner. As the mouth is often open, their large tongue and throat are visible. In the rare times its mouth is seen closed, its top teeth may or may not show. Loudred has a stubby nose above its prominent mouth. They also have two circular ears on the ends of short stalks, the ear insides ringed with black and purple and the backs of the ears ringed with black. Loudred has arms with three fingers and short legs, with two peg-like toes and a yellow circle on the foot’s underside. Loudred’s back has a yellow pattern that resembles sound waves. Loudred like tall grass, but they usually prefer caves.

Unlike Whismur, Loudred tend to be very loud and very active. They also tend to be very irritable and are quick to anger at times. In battle, it tends to punish its foes by screaming at them. Much like the rest of the family, it is capable of ear-splitting noise. It uses its round ears as loudspeakers, and builds power by stomping the ground. After it's finished shouting, it becomes temporarily deaf. 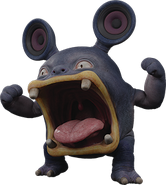 Generation VI
Add a photo to this gallery

Loudred is based on a boombox, a portable music system that can play music at a relatively high volume.

Loudred may be a combination of loud and dread.

Retrieved from "https://fantendo.fandom.com/wiki/Loudred?oldid=3200146"
Community content is available under CC-BY-SA unless otherwise noted.