“And with that...pow! I'm gone!”
— Lord Crump, in Paper Mario: The Thousand-Year Door


Lord Crump is a major antagonist in Paper Mario: The Thousand-Year Door, serving as the second-in-command of the Secret Society of X-Nauts, lead by Sir Grodus. Of all the antagonists in the game, Lord Crump is one of the most involved. He battles Mario four times, and his continued failure leads Sir Grodus to dub him the most incompetent X-Naut.

Lord Crump serves as the last boss in three chapters of the game — twice with his paper mecha Magnus von Grapple — and takes part in several cutscenes throughout the story. Though strong and has a sense of leadership among the X-Nauts, he appears to be rather simple-minded, thinks very highly of himself, and underestimates Mario's abilities in each of his encounters, leading to his defeat.

Lord Crump makes his debut in Paper Mario: The Thousand-Year Door. Before the events of the game, Sir Grodus learns of the Shadow Queen buried deep below Rogueport, and that the Crystal Stars are needed to open the Thousand-Year Door that seals her. They learn the locations of three Crystal Stars (Rogueport Sewers, Hooktail Castle in Petal Meadows, and The Great Tree in the Boggly Woods). By the time the game starts, the X-Nauts have already found the Crystal Star in Rogueport Sewers, and Lord Crump has been leading the search for the one in The Great Tree. After the X-Nauts abduct Princess Peach only to find that she doesn't have the Magic Map that leads to the other Crystal Stars, Grodus sends Crump to Rogueport to find more information.

Lord Crump is first seen as soon as Mario comes to Rogueport. He and several X-Nauts are interrogating Goombella to try and get information about the Crystal Stars. Before he can take things further, Mario, with Goombella's help, take down Lord Crump in a tutorial fight. He then summons an entire squadron of X-Nauts to attack them, but Mario and Goombella manage to sneak past. Because of this, the X-Nauts unknowingly attack Lord Crump instead.

After finding out Mario has claimed the Crystal Star in Hooktail Castle, Grodus sends Lord Crump back to The Great Tree to hasten the search, and sends the Shadow Sirens with him as backup. Knowing that the Crystal Star belonged to the Punies that lived there, he and the X-Nauts imprisoned the Punies so they could search without interruption, and even teamed up with the Punies' enemies, the Jabbies. With the help of Punio, Mario and friends manage to storm The Great Tree and find the Crystal Stars for themselves. They continue to interfere with the X-Nauts' search, and end up finding the Crystal Star first. However, Lord Crump enters the scene and nabs it just before Mario and co. can get it. He then sets the timer on a remote bomb beneath the tree, planning to escape as it blew up with Mario in it.

Before he can escape, Mario catches up to him, and he turns off the timer. Instead, he decides to battle with his personal robot, Magnus von Grapple. Though a long battle, Mario manages to defeat him, causing Magnus to explode and Lord Crump to drop the Crystal Star. He and the X-Nauts retreat, leaving the Crystal Star for Mario and The Great Tree for the Punies. Grodus chastises Crump for not being able to defeat Mario, and leaves him on standby for future orders.

Lord Crump is next seen in Rogueport when Mario and friends try to sail to Keehaul Key to find the next Crystal Star, supposedly hidden among the treasure of Cortez, the pirate king. He disguises himself as a pirate named Four-Eyes, and follows Mario on the trip. His disguise is hilariously bad, and he even breaks the fourth wall, telling the player to not tell Mario who he really is. Lord Crump secretly follows Mario through Pirate's Grotto until he reaches the Black Skull, home of Cortez, and he tells Mario he'll be standing by. After Mario defeats Cortez and claims the Crystal Star, he reveals his disguise and shows his true identity, and attacks Mario and co. with a giant battleship. Mario enlists in Cortez's help to use the Black Skull and battle Lord Crump and his X-Nauts, with Mario battling him himself. For this battle, Lord Crump has 30 HP, and he uses commands X-Nauts throughout the battle to attack Mario. Grodus punishes Lord Crump again, giving him one last chance.

Lord Crump is then seen in Twilight Town, trying to find the Superbombomb the Shadow Sirens tried to use against Mario earlier. Bowser and Kammy Koopa, in search of the Crystal Stars themselves, try to interrogate Lord Crump to get information, which leads into a square-off against each other. He tries to use the Superbombomb against Bowser, but after it fails to explode, Bowser lights it with his fire breath, unknowingly setting it off and exploding everyone.

After finding out the X-Naut Fortress' computer, TEC, was double-crossing him, Grodus takes Peach to the Thousand-Year Door to wait patiently for Mario. He leaves Lord Crump in charge of the fortress and the Crystal Star under security there. When Mario and friends finally arrive, Lord Crump aims to impress Grodus by defeating Mario with his new robot, Magnus von Grapple 2.0, and take his Crystal Stars. After he is defeated, he is sent flying into space. Unbeknownst to him, Grodus planned for his inevitable defeat, and wanted Mario to get the Crystal Star so he could open the Thousand-Year Door for him.

Lord Crump managed to survive the defeat against Mario in X-Naut Fortress. How he did so is unknown. Some time later, Goombella tells Mario all that has happened since their adventure, and mentions that Lord Crump, Grodus, and the X-Nauts are still around and stationed in Poshley Heights. They have seemingly changed for the better, though their current whereabouts after this are unknown.

In his Four-Eyes disguise while venturing to Keelhaul Key with Mario, Crump wears a red scarf, over his neck, and wears yellow overalls and a black undershirt. He also wears a yellow-and-white striped bandanna over his head, and one of his "horns" is visibly creased.

Lord Crump is shown to be a bumbling clown throughout the course of the game, and as a result is deemed as his most incompetent underling by Grodus despite being second-in-command of his forces. He also thinks very highly of himself, and often overestimates his own abilities, especially when battling Mario. In spite of all of this, he is willing to follow any orders of Sir Grodus, showing full loyalty to him.

“Are you crying yet? Yeah? Sorry, but this thing isn't armed with tissues. Well, Magnus von Grapple has that effect on people. Total, weeping terror. And you ain't seen nothing yet! Check out the power on this bad boy!”
— Lord Crump, in Paper Mario: The Thousand-Year Door

The original version of Magnus von Grapple is a large, pink robot. It has a cube body with a white "X" in the middle of it, two pink arms and feet connected by gray arms and legs, and a glass cockpit. It additionally has two yellow spikes protruding from the back of the body. In battle, it has 30 HP and 1 Defense. Its main attack is stomping on Mario or his partner, though it can also stomp on the ground to create earthquakes that damage both of them. Magnus von Grapple also has the ability to shoot out its fists, called X-Fists, and use them as weapons. Each X-Fist has 2 HP, and their attack is a flying punch that deals heavy damage. As such, defeating the X-Fists when they are shot out should be priority. After being defeated, it is destroyed and Lord Crump flees.

Magnus von Grapple 2.0 is then seen when Mario and friends reach him in X-Naut Fortress to get the last Crystal Star. Compared to the previous model its body is black instead of pink, and the "X" is yellow instead of white. There is also a red "2" in the center of the "X" (likely standing for "2.0"), and its fists are noticeably more pointy. Magnus von Grapple 2.0 has 70 HP and 2 Defense, making it much stronger than the original. Its main attack is flying off screen and diving onto Mario and his partner, and it can also send a spinning blade flying forward and even suck in members of the audience and fire them through a cannon. Magnus 2.0 still has the ability to send out its fists, called X-Punches this time. Each X-Punch has 5 HP, and like the X-Fists in the original model, they deal high damage, so Mario should take them out immediately. After being defeated, Lord Crump is sent flying through space in the explosion.

Lord Crump appears alongside Sir Grodus as a duo of playable characters in Super Mario Spikers, appearing as a Power-type Captain. Grodus' head is mechanically fused to Lord Crump, allowing them to fight together. In their bio, Grodus is described as the brains while Crump is the brawn. Their emblem is the insignia of the Secret Society of X-Nauts, and their theme is Art Rock. 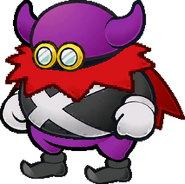 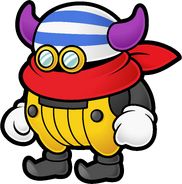 Lord Crump as Four-Eyes in Paper Mario: The Thousand-Year Door. 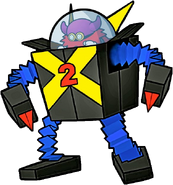 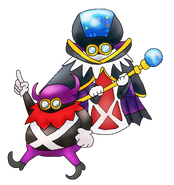 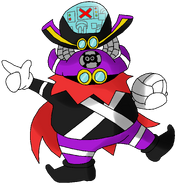 Retrieved from "https://fantendo.fandom.com/wiki/Lord_Crump?oldid=3205201"
Community content is available under CC-BY-SA unless otherwise noted.