Lopunny, known in Japan as ミミロップ (Mimilop), is a Normal-type rabbit Pokémon from Sinnoh. It evolves from Buneary with high friendship. It has a highly feminine appearance, but despite this, it has a 1:1 gender ratio, meaning it can be equally as much a male as a female.

It can turn into Mega Lopunny through Mega Evolution, and will become a Normal/Fighting type.

Lopunny is a bipedal Pokémon that resembles a rabbit. Its coat is brown, as is its small, round tail. It also has lopped ears. On the tip of those ears are long, fluffy fur extensions that are cream-colored. It also has similar cream-colored fur around its wrists, on its lower legs and above its red eyes. Around its eyes in the direction of its snout is a black marking on each side. Above its eyes are two long, cream-colored furry extensions, making it resemble large eyebrows.

Lopunny's forearms aren't of the same constant thickness. The end at the wrist is far thicker than the end at the elbow. Lopunny's thighs and hips are also thick.

Lopunny's pride lies in its ears, and the fluffy fur that connects to them. It grooms its ears occasionally and never fails. If they're pulled on roughly, it retaliates back with a powerful kick.

Only twice per year, it sheds its aforementioned fur. Its fur for the winter is fluffier and softer than its fur for the summer. It is also very cautious. When it senses danger, it either cloaks its entire body with its fluffy ear extensions, or just bounds off to safety.

When Lopunny Mega Evolves, its fluffy cream-colored fur on its ears become the same color as its regular fur, and turn ponytail-like. Two scrunchy-like, cream-colored tufts of fur appear around each ear. The furry extensions on its face merge into one butterfly-like cross, placed in the center of its face. Black fur grows on its neck and chest, and its legs also become black with brown, ovarian spots. The cream-colored fur on its lower legs shed off, leaving only its toes covered in this fur. The fur on its hands also become more compact, and its claws are also black.

Lopunny's physological appearance appears to resemble a Playboy bunny or bunny girls in general. It may also be designed after a fashion model, with its fluffy fur on its wrists and legs resembling furry cuffs and furry boots, respectively. It also may be based on the lop rabbit, a breed of rabbit with lopped ears rather than erect ears.

Mega Lopunny mayn have been inspired by aerobics and similar forms of physical exercise.

Lopunny's name is a combination of lop and bunny.

Its Japanese name, Mimilop, is a combination of 耳 mimi (ear) and lop. 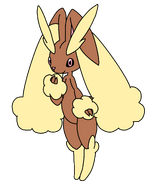 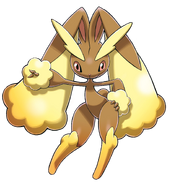 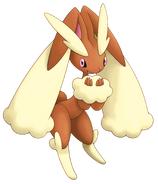 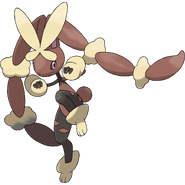 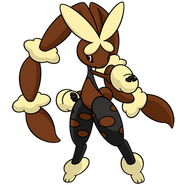