Lololo and Lalala are a pair of twins that first featured as heroes of the Eggerland series and later as bosses in the Kirby series.

Lololo and Lalala are sphere-like creatures. They are round, have tails, and wear rounded white gloves and shoes. The only difference is that Lololo is blue while Lalala is pink, and wears a yellow bow. They have no visible mouths, but are capable of speaking in some games and in the anime. The creatures they were are called Egg Fairies, species native to Planet Popstar who had the power to turn their enemies into eggs and develops box-pushing abilities.

Lololo and Lalala are featured as playable characters in Kirby: The Ultimate Fighting Magic!, with Lololo featured in Black Spinach version and Lalala in White Succotash version. They had their Magic Shot moves just like in Eggerland. They are based on their Kirby anime designs.

The Adventures of Lololo!

Lololo and Lalala stars once again as playable characters in their own 3DS game, The Adventures of Lololo!. Here, King Dedede steals Lalala and Lololo is up for the adventure similar to the Mario series of platforms.

Lololo and Lalala are default playable characters in Nintendo All-Stars: Superstar Saga. In their own story, Princess Peach calls them "round things". Lololo tells her that he and Lalala were Egg Fairies. They are based on their Kirby: Blowout Blast designs.

They are victims of the Kirthar's Snap Finger.

Lololo and Lalala in 3D Model. 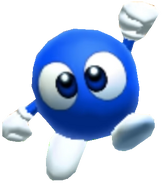 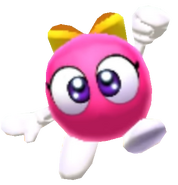 Artwork of Lalala uppercutting.
Add a photo to this gallery
Retrieved from "https://fantendo.fandom.com/wiki/Lololo_and_Lalala?oldid=2933720"
Community content is available under CC-BY-SA unless otherwise noted.