Fantendo - Game Ideas & More
Register
Don't have an account?
Sign In
Advertisement
in: Free to use Characters, Characters, What is the New Fantendoverse?,
and 11 more

Logi is a self proclaimed "intergalactic tourist" who collects artifacts from other planets and travels with his buddy Denos. Unlike Denos, who is usually calm and reserved, Logi is more than willing to speak his mind on things. He first appeared in Fantendo - Genesis. He later made irregular appearances with Denos in Fantendo Now.

Logi is a purple sparkling with a diamond shaped head. He has orange crescent shaped eyes and the inside of his mouth is orange. he wears a grey scarf with Galvan Runes over it.

Unlike Denos who is usually calm and reserved, Logi allows himself to get agitated when discussing stuff that seems weird to humans. He is also willing to speak his mind on things and usually is the one stealing artifacts or attempting to profit off something. While generally Denos is considered to be the smart one of the two, he isn't unintelligent and can usually be profound.

Logi makes his debut in Fantendo - Genesis, appearing in the science fiction convention as a human with the help of the Alienta Appearance Modulator. He reveals his true form in Chapter 5. He seems a bit annoyed with Rachel and Robyn, as Earth isn't used to aliens yet and they're constantly questioning things. He arrives with the two to a hotel room where the meaning behind Rachel's tattoos are revealed.

Later they appear at the final showdown where they sell "Team Unten" and "Team Six" shirts in human forms.

Logi appears in the episode Crash along with Denos. They talk with Unten and discuss what love really is.

“Talking to her, having fun with her, laughing with her... that's not love. This is love. Missing her and fearing for her. You're very lucky. You got this great piece of sad love in your... arms... and you don't even know what you have.”
— Logi to Unten, Fantendo Now: Crash (2015)

Logi was confirmed to be a playable character in Fantendo Smash Bros. Victory on April 13, 2016. No other details were really known since his reveal. 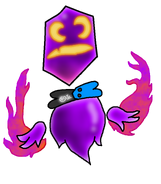