Locky Lorean (also known as Lurky by some) is one of the main characters in Fantendo Adventure. He is a 15 year old Fantendian and a very proud one. He has a pet dog named Hagane. His weapon is the Gut Buster.

“Gotta love how those zombies are slow as snails. Oh sorry, I didn't meant to offend you, Shaniqua.”
— Locky

“Oh god, I have to be god damn unlucky, like I witnessed three of my friends died and I couldn't do absolutely nothing to save them.”
— Locky


In Angel's Story, Locky meets Angel and Eva in Chapter 3, along Elise, Brock, Rick and Jorge. Brock dies and bites Eva and Eva eats Jorge leaving Locky mentally unstable, when Elise and Angel leave the group Locky and Rick find a Dog to witch he names Hagane. Hagane isn't very well and sadly dies, the death of Hagane breaks Locky and he goes insane, he murders Rick so he won't suffer and then commits suicide via hanging himself from a tree.

Locky is a tall, he has blue hair and his eyes are orange. He  has a dark blue T-Shirt and a slightly lighter pants. 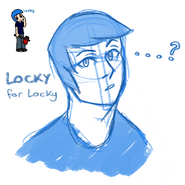 Locky by Brochi (t∣b∣c).
Add a photo to this gallery
Retrieved from "https://fantendo.fandom.com/wiki/Locky_(FA)?oldid=2526219"
Community content is available under CC-BY-SA unless otherwise noted.