Lixin is a dual Normal-type and Fighting-type Pokémon.

Lixin is a "fakemon" appearing in Pokémon Mid and Out. This is not an official Pokémon!

Lixin are known to playfully attack other Pokémon. They are quite competitive by nature.

Lixin is a combination of the words lick (informal term meaning to "defeat (someone) comprehensively") and shaolin. 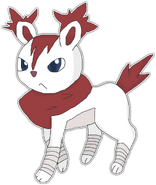 Lixin's shiny appearance
Add a photo to this gallery

Retrieved from "https://fantendo.fandom.com/wiki/Lixin_(SG7)?oldid=2028504"
Community content is available under CC-BY-SA unless otherwise noted.