Little Mac is a boxer and main character in the Punch-Out!! Series. His signature punch is the Star Uppercut, which his trainer Doc Louis created. It strikes fear into every boxer, due to its massive amount of damage-dealing.

Mac was born in the Bronx area of New York. 17 years later after his birth, Mac decided it was time to pick up a sport to live to. He choose boxing as this sport and asked 200 trainers to train him, but they all declined. At the gym a month later, he met Doc Louis, a ex-W.V.B.A. champion. Doc agreed to train him. Mac trained to become very muscular and fit. Doc began to start looking for an opponent for Mac to fight. However, Mac believed he wasn't ready to begin. So he fought his first fight against a wimpy Glass Joe, and dominated in a 1st round KO. This gave Mac inspiration to begin his boxing career full time.

Mac has short black hair, and tannish skin-color. He wears a black muscle-shirt along with green trunks with a white waistband and a red stripe going down the side. He is 5' 7" tall and weighs 107 pounds.

Mac played for Team Lios Lions in the Fantendo Football League for the first 2 seasons, before leaving to go to Nintendo All-Stars FC, after being replaced by Martin Breeze. He is good at punching corners away rather than catching them.

Little Mac appears as the co-founder of the resistance movement in Captain N: Outskirt Warriors. He and his friends in the outskirts have been long abandoned and forgotten however upon hearing about an escape route Little Mac gathers an army with his friend Takamaru to escape into the real world, back into Videoland.

Little Mac is brave and serves as a leader for the army despite being scared. He doesn't admit it but his fear is great. During the climax of the battle as he appears to be defeated the Master Hand pauses time to reach down and retrieve Little Mac and bring him back to Videoland.

2 Years after the events of Punch-Out! for the Wii, Mac had been living in a 6 Story apartment in Bronx, New York. He was still living off the prize money from the tournament, though was running out of it and had no alternate way to earn it. On one of the pages of the Local Newspaper, It said that the WVBA was holding another boxing tournament, with the massive prize money of 1,000,000 Dollars in cash. Motivated by this, Mac came out of retirement, had re-assigned Doc Louis to train him yet again and seeked not only the money, But his former glory.

Little Mac is one of the thousands of characters to appear in this 2D action battle royale. In the game his character is of the Scrapper class.

Mac makes a return 3 years after his retirement in this game, however he seems to have been lowered down all the way back to the bottom and now he'll need to fight back once again if he wants to gain his reputation back.

Little Mac returns in Super Smash Bros. Calamity, albeit downgraded to an Assist Trophy character. He acts the same way he did in Brawl, however, after punching a few times, Little Mac will do a K.O Uppercut to instantly K.O opponent. 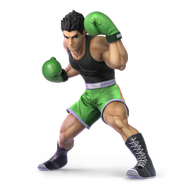 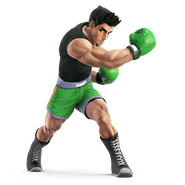 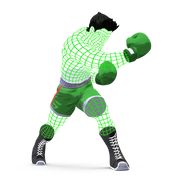 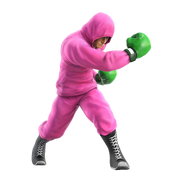 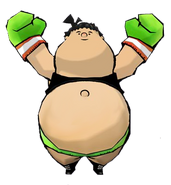 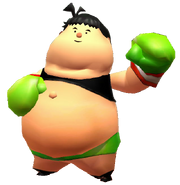 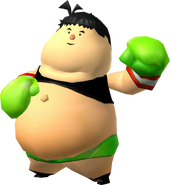 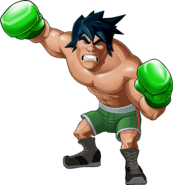 Add a photo to this gallery
Retrieved from "https://fantendo.fandom.com/wiki/Little_Mac?oldid=3224046"
Community content is available under CC-BY-SA unless otherwise noted.