Litten (Japanese: ニャビー Nyabby), is a Fire-type Pokémon. Along with Rowlet and Popplio, Litten is one of the Starter Pokémon of Alola.

Litten is a black, quadruped feline Pokémon with a tuft of hair on its head, and two large tufts of whiskers on each side of its red muzzle. Its forehead has two horizontal red stripes, crossed by one vertical stripe. Its legs are rimmed with two large red stripes, and its tail ends with a tuft of hair. It has a pair of large eyes with a disinterested look, with yellow sclera and red, narrow pupils. Its eyes are rimmed with red as well.

Litten is a Pokémon that remains calm and coolheaded and never shows any emotion on the surface other than its signature stoic expression.

Litten's fur is covered in an extremely flammable oil. Litten licks its fur for grooming, collecting the flammable hairs in the process. Doing that allows Litten to attack its opponents by spewing hairballs set on fire. Litten will burn up all its fur in a blazing explosion when it's time to shed. 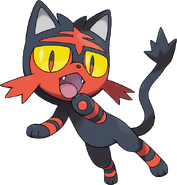 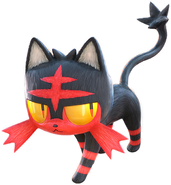 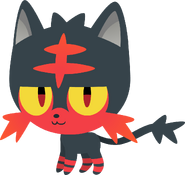 Litten is likely based on a tabby cat.

Litten may come from lit, little and kitten.